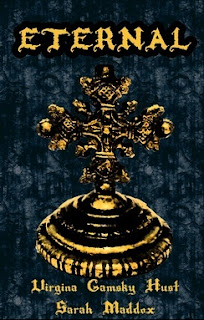 Three hundred years of penance, of suffering through an immortal life has left Maura praying for salvation. She joins a group bent on gaining back their souls by awakening The One and after a rather bleak few years in Cairo she thinks they’ve found him. But after a meeting with her sire goes terribly wrong she is trapped in the enemy camp. How far will she go to survive?

Gabriel is a normal, if rather jaded private detective living in Seattle Washington, until a beautiful woman shows up at his practice, claiming to be a vampire and asking for his help. Suddenly his life is turned on its head as he is introduced to the underground society of Fallen Angels bent on finding their savior.


Virginia Gamsky Hust lives in sunny Florida with her new Husband William Hust and their miniature poodle Apollo. She is persuing a degree in English Lit and works as a wedding planner in her spare time.
Connect With Virginia on Twitter
Sarah Maddox lives on the white sandy beaches of West Florida. She and Virginia have been friends since freshman year of college and she is the voice of reason in their little group. She is currently working towards her degree in Computer Science while juggling a part time job in a tourist town.

Message From The Author:


The idea for Eternal started as a fairly cliché vampire novel. Maura, our heroine, was a side character and Micah, her sire was going to be the lead. Then I wrote chapter one from her perspective and everything just kind of snow balled from there. Gabriel, who turns out to be more important than Maura in the long run, was an afterthought. I really enjoy writing male characters, I’m not sure why but I always have. So I added him in for my own amusement. Truthfully it took me six weeks from beginning to end to write this. I spent five to seven hours a day working with my Editor and writing to bring Eternal to life.

That brings me to a good point; working with a personal editor is amazing. Sarah has been working on short stories and anthologies with me for years. We met in college and we clicked. She like my writing style and can pick out most of my mistakes.

That being said we made a huge mistake with Eternal. We published it the first time after only editing once. We have since found, three times is the charm. We have also enlisted the help of people we call pre-readers, friends and classmates that get the book before the rest of the world. They mark where they think improvements are needed and we go over their notes. It’s helpful.

Our partnership is pretty unusual in the indie writing world from what I can tell. Sarah and I write together, as in I call her when I’m having problems and we work through the story. We map together and often I get her input on wording. We also work with a friend who is awesome at graphic design; he and his wife create our covers for us.

Legally speaking this means we had to incorporate, everyone gets a set share of the profits. That makes us, for all intents and purposes, a publishing house. It was funny the first time my CPA told me that. Now it’s kind of a running joke.

So there you go a little look inside the team behind Eternal. We hope you all enjoy the book as much as we did while writing it. There is a note at the end of everything I write offering my e-mail address for comments, or really if you just want to talk about the book in general. The offer is genuine and we would love to hear from anyone who reads Eternal. In the end I didn’t go through all of the work to write it for me, I wrote it to entertain you.

Thanks for taking the time to get to know us.
Virginia, Sarah and The Team.

Email ThisBlogThis!Share to TwitterShare to FacebookShare to Pinterest
Labels: For Review, Message from the author, Spotlight, Urban Fantasy, YA, YA Fiction, YA Urban Fantasy