SCORCHED Synopsis: Sometimes life leaves a mark… Most days, Andrea doesn’t know whether she wants to kiss Tanner or punch him in the gut. He is seriously hot, with legit bedroom eyes and that firefighter body of his, but he’s a major player, and they can’t get along for more than a handful of minutes. Until now. Tanner knows he and Andrea have had an epic love/hate relationship for as long as he can remember, but he wants more love than hate from her. He wants her. Now. Tomorrow. But the more he gets to know her, the more it becomes obvious that Andrea has a problem. She’s teetering on the edge and every time he tries to catch her, she slips through his fingers. Andrea’s life is spiraling out of control, and it doesn’t matter that Tanner wants to save her, because when everything falls apart and she’s speeding toward rock bottom, only she can save herself. Sometimes life makes you work for that happily ever after…

Praise for SCORCHED: “Armentrout’s latest new adult offering tackles substance abuse and mental illness — and, thankfully, the love of a good man is not going to be what heals this heroine.” – RT Book Reviews

And don’t miss the first standalone book in the series…

# 1 NEW YORK TIMES and USA TODAY Bestselling author Jennifer lives in Martinsburg, West Virginia. All the rumors you’ve heard about her state aren’t true. When she’s not hard at work writing. she spends her time reading, working out, watching really bad zombie movies, pretending to write, and hanging out with her husband and her Jack Russell Loki. Her dreams of becoming an author started in algebra class, where she spent most of her time writing short stories….which explains her dismal grades in math. Jennifer writes young adult paranormal, science fiction, fantasy, and contemporary romance. She is published with Spencer Hill Press, Entangled Teen and Brazen, Disney/Hyperion and Harlequin Teen. Her book Obsidian has been optioned for a major motion picture and her Covenant Series has been optioned for TV. She also writes adult and New Adult romance under the name J. Lynn. She is published by Entangled Brazen and HarperCollins.

Tanner
Aw, shit.
I watched Andrea walk into the living room, the normal twitch of her hips absent. No one swayed ass like Andrea, and seeing it gone from her step was answer enough. Our normal whatever-the-fuck-it-was between us had gone further than I intended. No doubt what I’d said had cut her, but shit, it was no different than any other day.
My hand tightened on the neck of the bottle. For the life of me, I had no idea what the hell Andrea Walters’s problem was. Honestly. No fucking clue. One minute, sweet and sugary words parted those pouty pink lips of hers. Next second, she was a fire-breathing dragon from hell—a hot, fire-breathing dragon, but still. Her moods flipped more quickly than cups did during a game of flip cup.
Maybe it was because she was a redhead?
I smirked.
She’d always been this way with me, and the most fucked-up think about it, there was a part of me that actually looked forward to whatever was going to come out of her mouth. Twisted as fuck. It was like a game between us, to see who could hit the hardest without lifting a finger. If nothing else, it was damn entertaining—or at least, it had been until now. Now, I wasn’t too sure about it.
Those pretty doe eyes of hers had looked suspiciously damp right before she’d looked away, and yeah…that didn’t sit right with me.
Kyler shot me a look as he walked past me and grabbed a beer out of the fridge, but I watched Andrea sit on the edge of the couch, her posture unnaturally rigid.
Sydney leaned against the arm. “We’re thinking about leaving early in the morning, around six.”
My gaze flicked to Andrea, expecting her to make some kind of crack about not getting up that early, but she was abnormally quiet. My spine stiffened.
“That should put us at the cabin between nine and ten in the morning, depending on traffic.” Kyler stood beside me as he screwed off the cap. “Then we’ll be heading back the following Monday.”
“Sounds good to me.” I didn’t take my eyes off Andrea as she fiddled with a strap on her sandals, slipping them onto her feet.
Sydney glanced at me, smiling softly. “You’re definitely off from the fire department?”
I nodded. Kyler had mentioned weeks ago about wanting to hit up the cabin before everyone headed back to class, and I’d requested the time off then. Which had meant I’d pulled a lot of doubles, but I hadn’t minded it. Wasn’t too different from the twelve-hour shifts we worked in the first place, and I’d only be there until February of next year, and then I was off to the academy. Not that I was in any hurry to leave the fire department, but being a cop was in my blood. Except I wanted to be a good cop. I’d probably still volunteer at the fire hall once I knew what kind of schedule I was looking at on the force.
“It makes sense if we drive up together.” Sydney toyed with a strand of her hair. “Kyler and I can pick you two up.”
Andrea had twisted toward Sydney and started to protest the whole idea of taking one car. I zoned out, staring at her as the bottle of beer dangled from the tips of my fingers.
Damn…she was a cute girl. Nah, she was more than cute, and it wasn’t like this was the first time I’d noticed that. From the first time I’d seen her at the bar with Sydney, she’d done more than just poke my interest. Hell, anyone with eyes knew she was a very pretty girl. Lush lips. Freckled cheeks and thick, dark eyelashes. Come to think of it, she reminded me of a girl I’d had a crush on in middle school. Hell, couldn’t remember that chick’s name, but she’d had freckles and red hair. I think I used to pull on her braids or some annoying shit like that. My lips tipped up in a small grin as I lifted the bottle to my mouth. Andrea was a motherfucking firecracker, though, not the kind of girl who was easily tamed.
Hell, not the kind of girl you even wanted to tame. 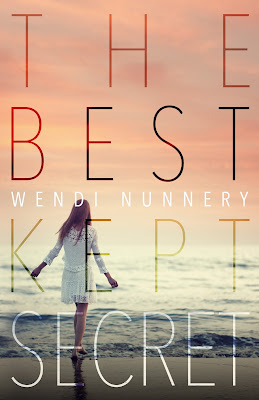 
In high school, everyone has secrets. Even well-brought-up Emma Fraser.
Emma’s sophomore year started out all wrong. First, her best friend Andy confessed to losing his virginity leaving Emma all alone in the V-Club. Then the rest of her friends got weird and suddenly Emma finds herself feeling like the people she knows best have become total strangers. And total strangers are becoming friends.
When Deegan Burke, a rich, gorgeous senior, asks Emma to be his date for the prom, Emma thinks her luck has begun to change. But rather than being able to bask in this newfound glory, her whole world starts to unravel. And when secrets that once seemed so innocent start to take a very dangerous turn, Emma discovers that true friends are friends no matter what…and some secrets aren’t worth keeping.

Wendi Nunnery is the author of The Mayfield Family Story. She is also a regular contributor to The Huffington Post and The Simply Beloved, a lifestyle website for women of faith. She is a proud alumna of Georgia Southern University and, at any given time, you can find her with a cup of coffee and a book. She lives, loves, and mothers in Atlanta, Georgia. The Best Kept Secret is her first novel.

Hi Kayla! Thank you so much for having me on your blog today!

I read a piece on the Huffington Post the other day about how fiction is never truly fictional. And I have to agree, although I certainly don’t believe it’s always on purpose. When I started writing The Best Kept Secret, which began as a short story for a fiction contest, I pulled inspiration directly from two tragic stories in my hometown. Writing helped me process through how such devastation could have occurred in a place like where I grew up. And some of the best fiction I’ve ever read comes from writers who were just trying to make it through hell. Writing helped them survive. That’s what writing does. And that’s what good books do. They keep us going.

Fiction isn’t always fiction because it stems from a writer’s imagination, an imagination that has been shaped and molded by the reality of her (or his) experiences. But, in many ways, using what we know to create our own stories gives us the opportunity to make sense of them. In The Best Kept Secret, Emma is kind of like the secret-keeper. She doesn’t know every secret, but she does know they exist…and that they’re doing some serious damage. She’s carrying a pretty heavy burden because she’s not even sure what it is. Emma speaks to the readers because she’s the narrator, but they’re finding out the truth right along with her, so she remains pretty vulnerable throughout the last fourth of the book. I feel sort of badly for Emma. She should have started a journal or something.

There are times when I sit down to write not because I have something specific in mind, but because I simply cannot help myself. In those moments, there is something inside of me - some itch, some worry, or some thought - that’s been hanging around just outside my consciousness and it’s got to get the hell out. I might not even be aware of it until it appears. But writing it out is cathartic for a big feeler like me. Ever had a long, hard cry in the shower for almost no reason whatsoever? That’s the best comparison I have for what writing does to me. It gets out the gunk and washes it away…at least for a little while.

My favorite college professor, who sadly passed away a year after I graduated, told our class that “once something is written down, it becomes fiction.” I think this is probably truer than “fiction is never really fictional.” We do pull from real life to create new worlds, but when we tell our stories - the real ones - they become fiction because they are uniquely ours. And while many people have endured the same struggles that Emma faces in The Best Kept Secret, the experiences are entirely her own. I believe, and I hope, that this will help readers connect with her and, perhaps, reconsider how valuable their lives really are.