Review: A Shade of Vampire by Bella Forrest

**Update!**
Bella has released a sneak peak for those of you who haven't read A Shade of Vampire yet!
The first 6 chapters are up for you to read!
Check it out here! 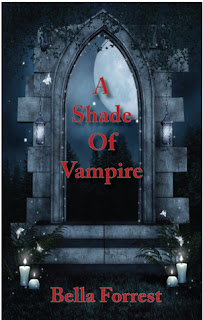 A Shade of Vampire
by Bella Forrest
YA Paranormal Romance
Published December 14, 2012
Kindle Edition: 147 Pages
*Ebook obtained directly from the author in exchange for an honest review*

On the evening of Sofia Claremont's 17th birthday, she is sucked into a nightmare from which she cannot wake.

A quiet evening walk along a beach brings her face to face with a dangerous pale creature that craves much more than her blood.

She is kidnapped to an island where the sun is eternally forbidden to shine.

An island uncharted by any map and ruled by the most powerful vampire coven on the planet. She wakes here as a slave, a captive in chains.

Sofia's life takes a thrilling and terrifying turn when she is the one selected out of hundreds of girls to join the harem of Derek Novak, the dark royal Prince.

Despite his addiction to power and obsessive thirst for her blood, Sofia soon realizes that the safest place on the island is within his quarters, and she must do all within her power to win him over if she is to survive even one more night.

Will she succeed? ...or is she destined to the same fate that all other girls have met at the hands of the Novaks?


Get Your Copy:
Amazon Link

Wow! What a great start to a new world of vampires. Loved this short read and can't wait to get my hands on book 2!

I enjoy reading paranormal novels that are based in a modern day type setting - this story has a twist. Sofia's birthday got interesting - that's for sure - but she would've never imagined being whisked away to an island with a fortress underground & penthouses in the trees. I love how creative the vampire's world is thus far. Even though this is a very short read, Bella writes just enough details into the story that you have a pretty good image in your mind of the setting. I'd sure love to see these freaking penthouse tree-houses, LoL. Can I have one in my backyard? I would need a ladder though - I can't jump like a vampire - sadly.

The characters are fabulously created. I really enjoyed reading from both Sofia's perspective & Derek's perspective. Sofia comes off as being a meek character - I sort of think of a bunny - but then you see that she actually has a backbone too. She's a very empathetic person & I loved it. Derek - oh Derek - *swoon* - waking up from a spell that was meant to make him sleep forever. After several decades, he's now in a world where he doesn't know about some of the modern day inventions: movies, cell phones, toasters, LoL. It makes him seem vulnerable in ways but then you realize that he means business. Everyone looks up to him as a leader but he seems tired of the drama that comes along with being a leader. His dad obviously doesn't like having to fall under his son & his brother Lucas *urg* sure doesn't like it. His sister Vivianne seems respectful - as well as most of the other vampires you see throughout the story. Lucas is definitely a good Bad Guy. I really dislike him - which is why he's the bad guy. That guy needs to fall in line & understand his brother is lead dog.

Even though it's an incredibly short read, it's full of emotion & connections. I didn't feel rushed & there was just enough balance in the details given to where I grasped a clear picture of everything. The ending is definitely a cliff hanger in an emotional sort of way. I can't wait to continue on with the story & the world that Bella has created. I can definitely see this novel going places! There's so much room for this storyline to grow & become an amazing full-length series.

The only downfall of the entire book would be the cover. I would love to see someone get ahold of the story and create a new cover because, sadly, I would've passed this right up if I was to pass it in the store or see it online. :(

Overall Rating: 5 Stars
Cover Rating: 1 Star <- the image itself is quite pretty - just doesn't connect to the story to me?
Characters: 5 Stars
Plot: 4 Stars
Climax: 4 Stars