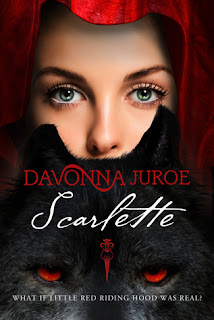 Scarlette
by Davonna Juroe
YA Fantasy/Paranormal/Fairy Tale
Published October 12, 2012 by BumbleB Media, Inc.
*Ebook obtained in exchange
for an honest review as part of the tour*

What if Little Red Riding Hood was real?

Ninety years before the Brothers Grimm penned their version of Little Red Riding Hood, a historic, gruesome series of events shocked all of Europe. In 1765, an unidentified wolf-like animal ferociously mauled dozens of peasants in the Gévaudan region of France.

Whispered rumors of unnatural creatures blended with age-old superstition, causing mass hysteria, and a werewolf was blamed for the carnage. Alarmed, King Louis XV sent his best huntsmen to rid the province of the beastly scourge, but this legendary massacre had only just begun.

Scarlette, an 18-year-old peasant, lives under this dark threat, knowing the nightmarish monster lurks in the surrounding forest. A poor seamstress, she labors to make ends meet and is skeptical of supernatural gossip.

Until her grandmother survives an attack.

Scarlette learns her grandmother is infected by the bite of the animal. Desperate to save her, Scarlette begins to uncover the dark secrets of her village and finds there are those who wish to keep their pasts hidden. As time grows short, Scarlette is befriended by a local nobleman and a woodcutter who share an eerie history with the wolf.

To save her grandmother, Scarlette must unravel the mens' connection and solve a long-forgotten crime. But as she pieces together the clues, Scarlette finds herself torn between the two men, both of whom desire more than friendship and together hold the key to the cure.

Based on both the traditional Grimm and Charles Perrault versions of Little Red Riding Hood, this dark YA is set against the Beast of Gévaudan attacks, blending history with fairy tale and gothic romance. Unique to the genre, the novel revives the French fable of the girl-in-the-red-cloak with a new, shockingly real existence that blurs the line between folklore and reality. 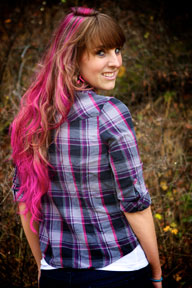 Davonna Juroe stays up way too late, has a severe garlic food allergy, and loves all things 80’s. She wonders if all this could actually mean she's a vampire.

In high school, she wore way too much glitter eye make-up. And in between many Disneyland visits and reading R.L. Stine’s Fear Street Series, she joined the high school drama department and may have developed crushes of the serious kind on many a theater boy. After many a broken heart (*sigh*), Davonna moved to the quaint, wooded village of Kalispell, Montana.

When she’s not writing, she shops @ thrift stores for hot-pink-Jem-and-the-Holograms-inspired-outfits, eats gluten free desserts, drinks tea out of antique teacups, and spends too much time on deviantArt, Pinterest, and Goodreads.

Scarlette is Davonna’s debut novel of epic-historical-fairy-tale-proportions, which she knows the Brothers Grimm would say is wicked cool.

My Review:
Poor, poor little Red Riding Hood... LoL
This was the first Fairy Tale retelling - I've always been kinda scared to dive into them because, well, c'mon... they're fairy tales. Scarlette was a GREAT way for me to break that habit!
I loved this novel! I was really surprised because I was thinking "How can someone REALLY bring fresh air to the retelling of Red Riding Hood... Is it even possible to NOT stay on the same track as the old fashion tale?" I was totally blown away. Seriously, Grimm would be proud, I do believe. LoL
I was on the edge of my seat just about the entire way through. The plot moves pretty quickly. I never once was bored or wanted to put it down. The mystery aspect just kept me flipping the pages as fast as I could. I started it at night after crawling in bed and finished it the next day. I wanted to know how it was going to end, who was the werewolf, the outcome of missing characters, who was the good guy/bad guy... I mean, oh my gosh. Totally on edge. Loved it!
The characters are really likable but you're torn between who to trust, who you want to trust, and who you can actually, really, honestly trust. Poor Scarlette! I felt bad for her just about the entire freaking time. It was just one thing after another! I was thinking to myself, "Jeeewiz! How many more hits can this girl take before she goes out and just lets the wolf eat her!"
There's a tiny romance aspect in this tale but that's definitely NOT the primary focus. It was kind of a breath of fresh air LOL I adore my romance novels but it's a nice change in pace to throw something else into the mix.
I don't want to leave spoilers so I know this is going to sound very vague (I'm sorry LoL) but I REALLY wanted a certain someone to be great... I really liked his character and really wanted to believe him... but I had no idea who to believe and was so NOT expecting what happened! Eeek!
I'd be lying if I said I wasn't a tad disappointed but honestly, it worked out just fine. I really liked the ending even though I was taken by surprise. Ha.
Okay, so my Overall Rating: A Solid 4 Stars!
Cover: 5 Huge Stars - the cover is AMAZING!
Plot: 4 Stars
Characters: 4 Stars
Climax: 5 Stars
Ending: 4 Stars﻿