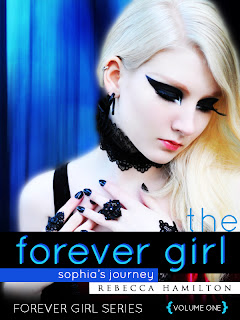 
Whatever you do, fight.

Sophia’s family has skeletons, but they aren’t in their graves.

At twenty-two, practicing Wiccan Sophia Parsons is scratching out a living waiting tables in her Rocky Mountain hometown, a pariah after a string of unsolved murders with only one thing in common: her.

Sophia can imagine lots of ways to improve her life, but she’d settle for just getting rid of the buzzing noise in her head. When the spell she casts goes wrong, the static turns into voices. Her personal demons get company, and the newcomers are dangerous.

One of them is a man named Charles, who Sophia falls for despite her better judgment. He has connections that might help her unveil the mystery surrounding her ancestor’s hanging, but she gets more than she bargains for when she finally decides to trust him.

Survival in his world, she learns, means not asking questions and staying out of the immortal council’s way. It’s a line she crossed long ago. If Sophia wants to survive the council and save the people she loves, she must accept who she is, perform dark magic, and fight to the death for her freedom.

Forever Girl will appeal to lovers of paranormal fantasy, mystery, romance, and horror.

Rebecca Hamilton writes Paranormal Fantasy, Horror, and Literary Fiction. She lives in Florida with her husband and three kids, along with multiple writing personalities that range from morbid to literary. She enjoys dancing with her kids to television show theme songs and would love the beach if it weren’t for the sand. Having a child diagnosed with autism has inspired her to illuminate the world through the eyes of characters who see things differently. To learn more about Autism Spectrum Disorder, please visit: http://www.autisticadvocacy.org
Blog – Facebook – Twitter – Goodreads

My Review:
Okay... where to begin....
Overall, this was a good read. I had a hard time getting through this read though if I'm being honest. It took me longer to read this book than it has any one book in the last year. Why was that? Overall, I'm not sure but there were a few things that bugged me. I didn't get as emotionally invested in the characters' well-being... or relationship for that matter.  There's also SOOOOO many things going on in this novel that it's hard to keep it all straight. It's an entire new world - reinventing the wheel completely. I don't have a problem with that at all when it comes to novels because I adore creativity - love when author's come up with completely original ideas. However, there's soooo many things that are reinvented that it gets a little difficult to keep up. At least, for me it was. Not everyone will have this problem. I adore vamp stories and have read so many through the years with the same basic fundamentals - maybe that's why it was harder for me to hang onto all of the new things being thrown at me during this novel.
Rebecca is a complete genius when it comes to the occult/witchcraft fundamentals. I've not read many occult novels in the past because the few I did read made wiccans seems horrible - definitely not the case in this novel. I loved that aspect - it's not something I know a lot about so I love learning new things & experiencing it with the characters.
The characters were great! I adored each character and was able to relate with the lead female - Sophia - especially when it came to over thinking things. Ivory & Charles were also great characters that I loved reading about. My only complaint was that I really didn't get emotionally invested in the characters at all. I'm not sure why? It seemed like everything was there - the relationship between Ivory & Sophia, the relationship with Charles... I guess I was too busy trying to keep up with everything else going on in the story that I didn't zone in on the character's relationships.
The plot was great - even though it took me forever to get through this novel. I did have a tough time with the actual timing of things. Several months were skipped in certain parts and it left me feeling like I had missed 20 episodes of my favorite tv show or something... it was strange, as a reader, to imagine what happened in the several months that are lapsed.
Overall - I definitely give this book a solid 3.5 Stars
Cover Rating - 3 Stars - The cover is great but in the book, Charles comments on Sophia "not looking like a Wiccan" because he pictures them as goth - noting Sophia doesn't dress Gothic. The cover image, to me, reflects the Gothic style?
Characters: 4 Stars
Plot: 3.5 Stars
Climax: 3 Stars
Ending: 3.5 Stars
﻿
By Kayla's Place at March 13, 2013