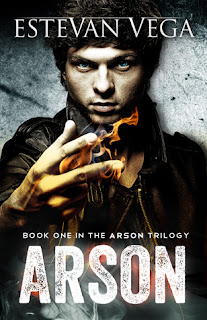 Arson
Book 1
by Estevan Vega
YA Paranormal
First Published May 4, 2010
Synopsis via Goodreads:

ARSON GABLE FEELS LIKE A FREAK. HE CAN CREATE FIRE. HE NEVER ASKED FOR IT. HE NEVER WANTED IT. BUT HE CAN'T SHUT IT OFF.

Before now, three things were true: he both loved and despised his grandmother; his life was going nowhere; and he was alone. But when a strange girl--who feels more normal behind a mask than inside her own skin--moves in next door, Arson hopes to find something he's never had: purpose. After years of living in fear, he will be forced to confront his haunting past and embrace the unknown as he walks the fine line between boy and monster. Edgy, realistic, and breathtaking, Arson, the chilling chronicle of an isolated teenager with unimaginable ability, is set to ignite the hearts and minds of a new generation. 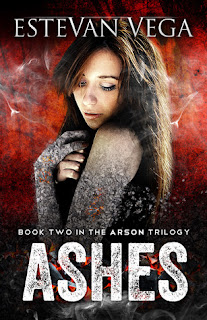 MORE THAN THREE MONTHS HAVE PASSED SINCE ARSON AND EMERY WERE SUDDENLY TAKEN. TAKEN AND THEN SEPARATED. AND EXPERIMENTED ON.

The minds running Salvation Asylum have abducted them for a dark purpose. A campaign has been set in motion to genetically alter mankind. Unknowingly, Arson has become the most vital instrument in this global scheme, initiated by a select group of brilliant scientists and cunning world leaders. Confused, trapped, and unable to fully manifest his abilities, Arson faces a new existence crawling with questions. Will he ever see Emery again? Is Grandma still alive? Can the fate of the human race really hang in the balance of one choice?

Nightmare and reality collide in Ashes, book two in the gripping ARSON trilogy. Love will be tested. Powers will shift. And the past will invade the here and now as Arson discovers a part of himself he has never before known and fights against his own shocking origins. Will this boy who once tempted fire be able to take on a fearful future? When the struggle intensifies and secrets come to light, will Arson be ready to accept the haunting revelation that there may be others out there, others like him?

About the Author Per His Goodreads Profile:

I’m a writer. Well, technically an author, because they say that you magically become an author (i.e. true creative) if you’ve published something, and you’re a writer if you haven’t (you know those closet aspiring geniuses who just scribble stuff into notebooks and hide it from the world?). But I still call myself a writer. I’m one of 4 brothers. The middle son. I guess that’s supposed to make me uber weird and dysfunctional, but the jury’s still out on that one. I love mint chocolate chip ice cream. Like, really love it. Watching movies and going to rock shows are 2 of my favorite pastimes, and I am addicted to telling stories.

Arson’s abilities are gone. Since the terrible and powerful events of the first book, Arson has lost control of them. What’s worse is he’s been committed to an insane asylum called Salvation and is forced to undergo psychiatric therapy sessions with a certain Dr. Carraway, a doctor who is convinced that Arson is making up certain specific elements of his past and hell-bent on filling Arson’s head with things he believes are untrue.

Oh, and he’s been having dreams that contain memories that aren’t his. How much should Arson believe?

It sounded so simple coming out of somebody else’s mouth. But there didn’t seem to be any answers at all, only questions and equations with no values. Primes and confusion.

No absolutes. Another twenty minutes were spent toying with diagrams and complicated theorems that Dr. Carraway assured him had been covered in previous sessions.

“Have you completed the written assignment for today’s session, Stephen?” the doctor asked once they switched to English.

“Yes, it was a writing prompt. I asked you to write about your dreams. What you recall specifically. Your grandmother, for instance, or your high school prom.”

Wait, how did he remember that? He thought back to that night, tried to remember what he did instead, but it was all hazy. Was he working? Hanging out with friends?

No, I don’t have any…except her.

“You look slightly nonplussed. That means confused, in case you didn’t know. Should be one of the vocabulary words I had you look into. But I’m guessing you didn’t complete that assignment, either.” Dr. Carraway sighed, making notes.

“Stephen, how do you expect to heal if you aren’t doing your part? There’s no reason your education should stop simply because you’re in here getting better.”

“Wait, stop this crap. Since when are you a teacher anyway, Doc? Just who are you!”

“Calm down, Stephen. I told you, I am your psychologist. I am also quite qualified to guide you through your basic studies. In addition to counseling you, I am your teacher, for the time being.”

“And how long is that going to be?”

“Well, I suppose that’s up to you. The overseers of this institution pay a lot of money to invest in the minds of those who need it. Play ball and they might let you go early. Your eighteenth birthday is approaching.”

“December. It’ll be Christmas in a few weeks.”

“How is that possible?”

“It begins here, Stephen.” The doctor nudged his index finger up against his forehead.“Once you realize this, the rest is cake.”

A short pause walked between them.

“Speaking of cake, why don’t we call it an afternoon? But I want those assignments, along with the reading, completed by the next time we meet. So keep busy.” The doctor signaled his guard to bring in a slice of cake. “I snuck one in for you. It was mine, but we’ll keep this our little secret.”

Arson’s face changed slightly. He nodded, slicing the fork through the moist triangle. “Your grandmother used to make carrot cake, didn’t she?”

Arson remembered the taste of something similar. His brain flashed pictures of one of his birthdays, when he was much younger. The bitter face Grandpa made when Grandma forced him to eat it, even though he didn’t want to. There weren’t kids around to celebrate, no party to speak of. He must’ve been four or something, but the image was so hazy, he couldn’t be sure.

The taste of this cake helped recreate the static images briefly.

“Well, I wouldn’t dare compare your grandmother’s baking to this.” A grin climbed up the side of Carraway’s mouth, as he stood up. “But try to enjoy it. I’m not much of a cake person.”

Neither was Grandpa, Arson thought. He shoved another bite down his throat and took a sip of water. “Please tell me what happened to my grandmother, Dr. Carraway. I need to know,” he said sternly, eyes peeled and narrowed with anticipation.“How did she die?”

“I don’t think that’s something you’re ready to hear yet.”

Dr. Carraway looked at the guard, an air of uncertainty mixed with deliberate pause. He placed his hands on his waist, locking eyes with Arson. “It was a fire. She was asleep, the police believe, when the house went up in smoke. I’ll spare you the details, but I’m afraid your grandmother didn’t make it out alive. In fact, there was nothing left of your home.”

Arson put his fork down. He suddenly felt very sick. A thick cloud hovered over his mind. He stared at the guard then back at the doctor. None of this was right. What kind of man would lie like that? Make up some kind of twisted story?

Was he toying with Arson’s emotions for the thrill of it? He couldn’t take this charade any longer. Enraged, Arson got up and grabbed Dr. Carraway by the throat. “Get me outta here!” he shouted. “I wanna see for myself.”

“No more lies! None of this makes any sense,” Arson said, his hands swelling hot around the doctor’s neck.

“It will,” the doctor struggled. “Your mind continues to remain unwilling…to accept…truth.”

“Thank you,”the doctor said, looking at the guard who had knocked his patient out. Gasping for air, he reached up to touch his throat. It stung. The skin was burned.

“No way,” the guard pointed out with big eyes. “Look at your neck. That little runt burned you.”

Carraway rubbed his throat one last time. It stung. “I think this afternoon’s session went slightly better than expected.” He grinned, torn between concern and unbelief. These sessions had no end in sight. He wondered how long the boy’s mind could take it all, if he could take it all.

The doctor reached down on the floor to grab his pen and notepad, staring one last time at the boy on the floor. “It seems the arson is back after all.”

Grand Prize Includes:
Signed copy of Arson
Signed copy of Ashes
Custom Arson T-Shirt
E-books of Arson and Ashes (Nook or Kindle)
Custom Personalized letter from Estevan Vega telling you how classy you are ;)
$25 Amazon Gift Card
(US Only)

Email ThisBlogThis!Share to TwitterShare to FacebookShare to Pinterest
Labels: Giveaway, Spotlight, Tour, YA, YA Bound Tour, YA Paranormal