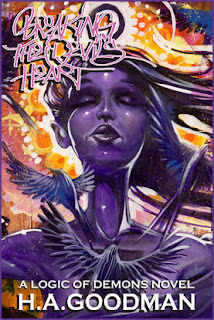 Breaking the Devil's Heart
Logic of Demons #2
by H. A. Goodman
Fantasy
Published May 4, 2012 by Outskirts Press, Inc.

When Stewart and Layla recruit a demon to spy on the Devil, their decision takes them on whirlwind ride through the afterlife. Journey alongside this young couple in H. A. Goodman’s new novel, Breaking the Devil’s Heart, and join forces with a teenage Angel outcast to bankrupt Satan's underground Company and save Heaven from civil war. H. A. Goodman's Breaking the Devil’s Heart is a rollercoaster afterlife experience that tests a young couple's love, their grasp on reality, and the essence of human nature. What happens when Stewart and Layla tour Hell’s Marketing Department and Stock Exchange? What happens when their relationship is tested by Satan? This book is unlike anything you’ve ever read, or ever thought the afterlife might be like. Breaking the Devil’s Heart is an enlightening look into an alternate world, a new afterlife, and a profound journey inside the human conscience.

H. A. Goodman is a former financial adviser and high school history teacher who grew up reading comic books and playing Dungeons & Dragons. In 2010, he combined his love for fantasy, science fiction and philosophy to write his debut novel, Logic of Demons: The Quest for Nadine's Soul. As a follow-up to Logic of Demons, H. A. created an even more provocative and thought provoking tale entitled Breaking the Devil's Heart. The latest novel is a whirlwind ride through the afterlife and a journey within the human psyche. The plot utilizes cultural mythology to highlight certain peculiarities of human nature tied inextricably to conflict. The story incorporates world history and a bizarre imagination to create a uniquely dystopian afterlife that is both amusing and frightening. With rave reviews popping up daily, Breaking the Devil's Heart is rapidly growing in popularity throughout the blogosphere. H. A. currently resides in Los Angeles and no longer plays Dungeons & Dragons, although he still loves comic books.

Well, I really wasn't sure what I was getting into when I started this novel because up front, you're told it's different than anything you've ever read. Definitely true!

At first, the novel started a little slow but then it built up more and more. The pace ended up moving at a steady speed for the most part. There were a few moments when I just had to sit it down and come back to it later. I think that's why it took me so long to finish it. The novel is told through Stewart's POV so that's always a breath of fresh air for me. I'm so used to reading novels told from the female lead's perspective. Although, I have to admit, I enjoyed the female lead (Layla) and would've been interested to see a lot more from her perspective to swap it up a bit.

The author's new spin on hell as a corporation who sells the "formula" is pretty genius - totally the most creative spin on hell I've read in a while. Trying to take down the Devil by any means necessary is the goal...decisions are made quickly because Stewart wants to accomplish his goals and he wants to do it as soon as he can. I think if I would've read this novel too quickly, I would've missed some of the things that were so thought-provoking... thinking about heaven & hell, what would you do in some of the situations, the differences that the actual time period makes... it's interesting to step back and just think....

There are a few places where the writing style felt more like I was reading a dictionary of sorts - pretty formal and felt almost apart from the novel, but overall, it wasn't a hindrance.

Overall a really thought provoking read that I enjoyed but I'm not jumping up and down screaming get it, get it. If you like fantasy and enjoy something a little different then definitely get it. I think the ebook was only $.99 so definitely worth that plus more.

Can I just say the cover is a work of art??! It's really pretty amazing. That's the first thing that drew me to this novel when I was asked to review it. I'm not really sure about the connection itself with the story but it's such an amazing work of art it almost doesn't matter. LOL