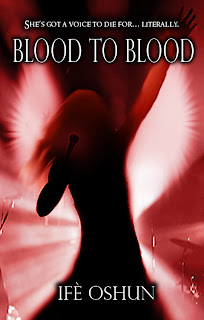 
Synopsis from Goodreads:
"Angelika Brown has a killer voice. Too bad her über-conservative parents aren’t happy when she decides to quit high school to be a pop singer. What’s worse, she’s morphing into a blood-drinking immortal and her soaring vocals can now decimate everything, and everyone, within earshot. Will she learn how to control her new powers? Or will her bloodlust cause her to kill her girl group before they reach the Top 10?"

Excerpt:
“The sound of his heartbeat was the background music banging in my ears as I, in a daze, took another step forward. My fingers itched with the desire to pull through the gold-tinged hair hanging less than an inch from my face. His eyes narrowed and his head cocked to the side. He was exposing his neck…yes, as if he was offering it to me. I inhaled his scent again and my brain switched off.

Led by my watering mouth, I closed the gap between us and placed my lips on his neck." 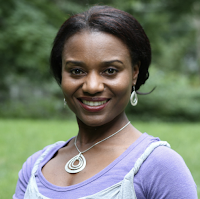 Starting out as an actress, the Fine Arts and English major went on to work for over a decade as a music journalist for national magazines and major websites including serving as Editor-In-Chief for HiphopRnbSoul.com. She also produced, and wrote for, television and theater. A couple of her sci-fi/fantasy plays were produced Off-Broadway and in Los Angeles, and she did her Writers Guild of America internship with Star Trek Enterprise and Voyager.

Her work incorporates fantasy elements with some combination of the following: humor, social issues, family themes, metaphysical concepts, and pop culture. She lives in Boston with her small son and ink-black cat, and can be found online at her personal website.

Connect with the Author:
My Review:
Blood to Blood was an interesting read. It's different than any other paranormal story I've ever read. It was a little difficult to understand what type of being Angel and her family were at first but through several chapters, you finally grasp it alittle better. The story line was pretty good. It was an easy read - flowed well from moment to moment. I really don't put this read in line with vampires at all..... even though Angel and her family drink blood, it's otherwise un-relatable to vampires in my mind. I've seen where others disagree so I guess "to his their own" fits in this instance. I mean... she SEES musical notes & chords dancing in front of her in different colors and KILLS when she wants to just by singing certain notes... that's definitely unlike any vampire story I've heard of :)
The romance was sort of non-existent for me except where Justin was concerned. I could tell there was a romantic undertone with regards to Sawyer but it was subtle until near the end of the book. I really had no idea who Angel would end up with in the end. The twists that occur in the plot with regards to character revelations is fabulous - completely unexpected. The last few chapters were the best to me!! I loved several aspects of Ife's world - especially how Angel's mom took her to "feed" for the first time at what seems like a paranormal restaurant Ha!
Blood to Blood is definitely a creative read. The author Ife Oshun did a great job with that aspect for sure. It was unlike anything I'd ever read. Overall I really did enjoy this read. I'm not bouncing up and down about it but it's worth picking up.
Overall Rating: 3.5 Stars
Cover: 4 Stars
Characters: 3.5 Stars
Plot: 3.5 Stars
Climax: 5 Stars
Ending: 3.5 Stars
Giveaway!!
Enter to Win a Signed, Personalized Copy of Blood to Blood!! Good Luck Everyone!
****Sorry everyone - this is only for US & Canada Residents****
a Rafflecopter giveaway
By Kayla's Place at November 30, 2012