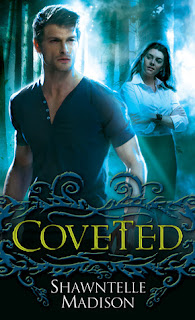 SOMETIMES WHAT YOU COVET IS IMPOSSIBLE TO KEEP.

For werewolf Natalya Stravinsky, the supernatural is nothing extraordinary. What does seem strange is that she’s stuck in her hometown of South Toms River, New Jersey, the outcast of her pack, selling antiques to finicky magical creatures. Restless and recovering from her split with gorgeous ex-boyfriend, Thorn, Nat finds comfort in an unusual place: her obsessively collected stash of holiday trinkets. But complications pile up faster than her ornaments when Thorn returns home—and the two discover that the spark between them remains intense.

Before Nat can sort out their relationship, she must face a more immediate and dangerous problem. Her pack is under attack from the savage Long Island werewolves—and Nat is their first target in a turf war. Toss in a handsome wizard vying for her affection, a therapy group for the anxious and enchanted, and the South Toms River pack leader ready to throw her to the wolves, and it’s enough to give anybody a panic attack. With the stakes as high as the full moon, Nat must summon all of her strength to save her pack and, ultimately, herself.


Get Your Copy of Coveted:  Amazon   Barnes & Noble

Shawntelle Madison is a web developer who loves to weave words as well as code. She’d never admit it, but if asked she’d say she covets and collects source code. After losing her first summer job detassling corn, Shawntelle performed various jobs—from fast-food clerk to grunt programmer to university webmaster. Writing eccentric characters is her most favorite job of them all. On any particular day when she’s not surgically attached to her computer, she can be found watching cheesy horror movies or the latest action-packed anime. She lives in Missouri with her husband and children.

My Review:
This story takes an interesting look - the likes I've never read - into supernatural characters with neurological/behavioral/psychological/whatever you want to call it problems. The main character is completely OCD (or should I say CDO because that's the alphabetical order) and has an absolute obsession with collecting...wait for it.... waaaaiittt for it... Christmas Ornaments... Blew my mind... I was definitely NOT expecting that but I have to admit, it was an entertaining read and written in a way where you "got it" - you understood what made her tick the way she did. Natalya "Nat" is a great character if you enjoy character leads with "issues." Shawntelle doesn't write in a way that Nat's problem is annoying...you come to terms with her problems because you're reading through her eyes... I didn't think I'd enjoy that at first. The whole "obsession with Christmas ornaments" thing really threw me off but the way the story is told, you don't focus on how strange that is. You focus more on what else is wrong in Nat's life - why she is the way she is.

Each character stands out in the story - from the grumpy Bill to the white wizard Nick who quickly became my favorite character. Every page I turned I was hoping for another glimpse of Nick.

The very first pages of the book absolutely had me caught in its web.... I mean... Chocolate Syrup... Yes please... So right at the beginning I was intrigued by the story. I was hoping for a little bit more of the "juicy" romance aspect but that never came - the only bite being right there in the beginning of the story. I think this is classified as a more YA novel so I understand why it didn't go more into the sexual aspect of the story BUT even with that in my mind, I was a tad disappointed... A relationship with Nat & Thorn is just grazed... you know that they obviously had something really strong in the past based on the small glimpses that you get but there's not a strong focal point on their relationship. I started thinking that Nat & Nick would be perfect for each other but that never blossomed either... maybe book two? Hmmm....

The main focal points of the story end of being the survival of Nat due to other clans wanting their territory, her banishment from the clan, her OCD/Hoarding problem, and her status with her family members.

Overall, I really did enjoy this read even though the directions taken in the plot weren't those that I would've suspected... maybe that's a good thing? I was surprised to say the least. As a "romance," this doesn't rank high on my list BUT as a "paranormal/fantasy" read, this is one that I highly suggests to readers. You end up encountering more supernatural creatures in this book that several others I've read. There's everything from wizards, weres, succubus, to mermaids...