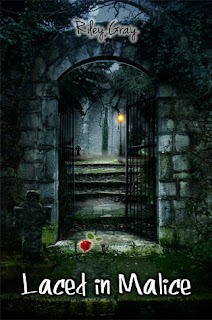 Laced in Malice
(Laced #1)
by Riley Gray
Published November 1, 2012
YA Romance
(I'd say 17+ due to sexual encounters/scenes/dialog)
Ebook obtained directly from author in exchange for an honest review


Synopsis via Goodreads:
Behind the creepy castle like exterior of Birchtree academy is the sound of gossip, back stabbing and malice. When Zara’s dad takes on the new principle job at the elite boarding school, Zara knows she’ll be an outsider. She dreams of true love and marriage instead of possible frenemies and secrets. Definitely not Birchtree material.

In the cusp of everything are the twins. Oliver and Elizabeth (Lizzie) Nixon are renowned for their different – yet equally effective – methods of torture. And both have their eyes set on goody, goody Zara. Oliver wants to date her and Lizzie wants to befriend her?

At first, Zara is caught in the Nixons spell, but it’s not long until cracks begin to show through their dazzling façade. An anonymous email account, which targets students with their own secrets, has focused its energy on Zara using weapons only the Nixon’s could have provided. But have they turned on her? Is there a hidden agenda behind Lizzie’s interest in Zara? It’ll take four months, three warnings, two released sex tapes, and one dead body for Zara to finally learn the truth. And the truth can either destroy the boy she’s fallen for – and his twin sister – or save them both.

Get Your Copy of Laced in Malice from Amazon for $2.99

About The Author:
Riley is an author in her early twenties from the UK. She enjoys eating, reading, hanging out with animals and watching TV.  Laced in Malice is her first novel and was just released in November.

I'm going to be completely upfront and say that there are several similarities with this novel and Cruel Intentions... I'm usually one for complete originality but I guess this is one instance that I didn't mind because it was so right. Normally I HATE, LOATHE, DESPISE moments of Deja Vu - you know the feeling you get when reading a book and you think "umm haven't I seen this before??" I normally can't stomach a book if I come across too many of those instances. But honestly, I couldn't put this book down. Maybe it has something to do with the fact that Cruel Intentions is one of my favorite movies ever or maybe it was just because this is simply that great of a book. The story is written fabulously, the characters are likable, the plot flows from nail biting to hot sex to bitchy girls so you're constantly moving from one thing to the next. Some people may say "ugh, this is a ripped off version of Cruel Intentions" or "this isn't an original book - it's more like fan fiction based on a movie." I say read it and then decide what you think. I enjoyed it because it was honestly a great read!

The characters were AMAZINGLY crafted. I fell in love with Zara from the start even though her character is very similar to Reese Witherspoon in Cruel Intentions: the virginal, innocent, halo-wearing head master's daughter who does an interview - except it's for the school newspaper and not a big magazine - spilling the beans about her thoughts on waiting until you're in love to have sex. Then you have the twins - Lizzie & Oliver. They're fabulous characters that you love to hate (well Lizzie anyway - Oliver you can't get enough of in a loving way even though you should hate him, LOL). You have the bad boy & his sister like Cruel Intentions but Oli & Lizzie are twins which makes it really interesting. They aren't trying to get into each other's pants in this story so like I said, it's just similar. Of course there are several other key players but the focus is on Zara, Oli & Lizzie.

The scene is set in a boarding school that reminded me of an old castle and in a few places I thought of Hogwarts. It was easy to fall in love with the school itself because of the way that Riley portrays it... a fabulous gym, great dorms with HUGE rooms, nice bathrooms (even if they are communal - I lived in dorms and our bathrooms definitely weren't as fabulous as Birchtree Academy's >_< ).

There were a couple places that were uncomfortably close to events that were actually in Cruel Intentions - like Oliver meeting Zara at the top of the escalator (cue Ryan Phillippe in his sexy blue shirt waiting on Reese Witherspoon, *swoon*). But these scenes played out completely different so it wasn't annoying - just similar. Oliver also keeps a journal - which I LOVED even though it was another similarity with Cruel Intentions. Okay - so honestly, if you loved Cruel Intentions, you'll eat this book up! Just being honest here... :)

Ahh yes, Gossip Girl... in Laced, the school has "The Voice" which is similar to the Gossip Girl in that they squeal all kinds of secrets to the entire student body... The Voice is quite malicious though and sends emails to EVERYONE.... all the student body plus the principal (which happens to be Zara's dad).

There's drama, death, romance, casual sex, lots of sexual dialog, stressful situations & down right malice... The title fits well! I almost had a panic attack at 1 am because the next book is not out there for me to immediately pick up and start reading. I NEEEEEEDDDD the next book so I can find out what happens!!!

Cover Rating: eh... this is a cover I've seen on a few other books out there so I really don't want to rate it... I do love the image on the cover but as good as this book is, I'd definitely love to see a creative, original cover. Covers are very important and my first deciding factor on whether or not I'll be grabbing a book starts with the cover....


Giveaway!!!
Alright - so since I LOVED this book & want to pass it along to others, I'm going to buy & gift a copy via Amazon to one lucky winner! This is one great way to help spread the word about new authors & great reads.

a Rafflecopter giveaway
By Kayla's Place at November 20, 2012