Review: Tickle Me by Monica Bouvier 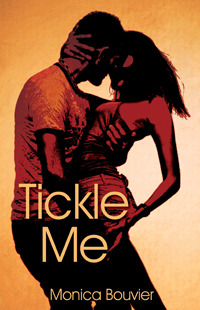 In this tale of wanton love, decadent seduction, and dangerous liaisons, we meet Alice—a quiet, meek woman who, at 29, has never been touched by a man, let alone experienced the piercing pangs of love’s bittersweet kiss upon the heart. Alice is obsessed with Greek Mythology, and early on, she resigned herself to the fact that Lachesis, the Fate who chooses our lot in life, destined her life to be one without love—that is until Erik, a mysterious admirer, surfaces.

Has Zeus finally heard her cries and granted Cupid, the offspring of Aphrodite, permission to hurl his arrow of love in Alice’s direction? Or, will she get caught up in love’s unscrupulous web of deception and deceit after the identity of her mysterious lover is revealed? How far will Alice venture to recapture love lost—real or imaginary? How far would you go?

Monica Bouvier is married and has one son. Born in Spokane, Washington, Monica moved with her family to Anchorage, Alaska at the tender age of six. Her grandfather was one of the first African-American homesteaders in Anchorage, as well as, owned and operated the city’s first minority-owned construction company, of which, helped in rebuilding Anchorage after the 1969 earthquake. Her grandfathers influence and love of Alaska filtered throughout Monica’s whole family, the majority of who still make this great state their permanent residence today.
Monica, a former model, has worked in television/media industry for over two decades. She is recognized as the first African-American Public Service Announcer director in Alaskan television.

Monica, an avid self-help enthusiast, is a student of the human condition. It wasn’t until after successfully maneuvering through her own relationship obstacles that she felt qualified to add her own personal spin to the complexities of the male/female relationship in the form of writing novels. Her first novel, In Search of Mr Wonderful, The Journey From Myth To Madness, is a loosely based adaptation of this journey. Monica is currently working on her next set of novels, The Ten Commandments of Dating, Poisoned Pen, Mermaidland and The Margarita Social Club, which constitute a long secession of romantically charged tales of love, lust and unbridled imagination still to come from this author.

I'm a little torn on this novel. I really enjoyed the first 3/5 of the book... then I ended up bored because it just kept going and I felt like I was going nowhere. I ended up skipping probably 1/5 of the book and jumping right to the part where Erik & Alice meet in person. The mental journey that you take with the main character - transitioning from thinking of herself as a no one to someone who is desirable to at least one person - is interesting. It was a perspective on life that I don't read about often. Then you end up with the online relationship with Erik and it seems too good to be true. I never really found anything Erik was saying during the actual "conversations" attractive - I mean, a guy who says "hehe" and "ticklezzzz" just isn't attractive. Plus the crazy amount of smiley faces and such he uses in his emails is a little non-attractive to me. But his stories - oh man - they're intriguing. It's almost like you're about to enter a BDSM scene - spanking or one of the lighter bondage scenes - but then... it turns out to be tickling... It's a little... odd I guess I could say - but fun to read. I'm an insanely ticklish person so someone handcuffing me to the bed and having their "tickling" way with me is NOT something I'd look forward to & definitely NOT something that would get me all hot and bothered. Even though some of that sounds negative, it's just personal thoughts. The end... well... the end takes you completely off guard. Looking back, it made it quite interesting to re-read some of the conversations. It shed an entirely new light on the entire novel. Loved that spin on things.


Overall Rating: 3 Stars - It was okay but I really had to push through to the end after a certain point