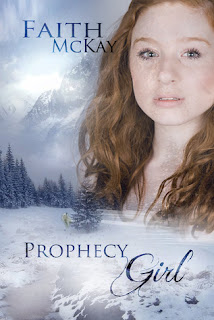 Synopsis via Goodreads:
Ever since Samantha Winthrop's mother moved them to Lacuna Valley, supposedly in search of better weather, the list of strange questions she has no answers for has been growing out of control.

Does her little sister, Violet, have the ability to make things happen just by "praying" for them? Are Sam's dreams really predicting the future? Is she destined to marry the boy she just met, and what is the mysterious orb that he's guarding? Why does she get the impression that there are dangerous creatures watching from the woods?

While Sam should be focusing on answering those questions, there is one other that makes them seem almost irrelevant: Is her mother planning on killing her and Violet?

I write stories about characters with real world struggles in otherworldly settings. Before I knew how to form letters on the page, I scribbled lines that looked like writing on page after page, bound them together, and handed them to people. I think that most writers tend to have a moment from their younger years they look back on and think, aha! it was destiny, and this is the earliest of mine.
I wrote a book with characters that struggle with the idea of having a destiny called PROPHECY GIRL. In comparison, I really lucked out that my destiny was to struggle with comma placement and be that awkward lady who points out puns at parties.

But like Walt Whitman said, I am large, I contain multitudes.


Message from Faith:
Big and fun and exciting things are happening in my laptop these days, and I'm so excited about them that I was a little thrilled when Kayla emailed and asked if I wanted to share with her readers about what might be coming next.


I'm working on book two in Lacuna Valley, and a bit on book three. I'm also working on a companion short story to book two—this is something short, and covers some of the events from the beginning of book two, but follows Alzina. If you enjoyed Prophecy Girl, make sure to sign up for my newsletter. The next time that should be coming out is when I have book two done, and the short I'm working on will go out free to the people signed up for the list at that time. :)
When my mind isn't in Lacuna Valley, it's in another world, or well, two. I'm working on Luminescent, the first novel in a new series. It's a fantasy and science fiction fast-paced adventure with four teen women as main characters. There's a lot of magic, city lights, and discovering of worlds.
Between the worlds of Luminescent and Lacuna Valley, I think my brain might burst from all the creative enthusiasm!
I can't commit to dates yet, but I know that book two in Lacuna Valley, the short, and Luminescent should all be out in the first half of 2013, and I couldn't be more excited.


My Review:
I really enjoyed this read. The synopsis drew me in and I was fascinated. Urban Fantasy is one of the genres that I have really grown to love over the past couple of years so I had high hopes for this read. It didn't disappoint.

Faith McKay created amazing characters who struggle with real life issues - but they're thrown into a fantasy type situation. Sam = abusive mom, dad who stays out of it, moves around a lot, little sister who she wants to take care of & guard.... Nick = Mom left, dad drinks & just doesn't connect much anymore, doesn't fit in with his family, sweet little brother who he wants to look out for & protect. Zach & Violet are precious. I can just see Zach bouncing around talking non-stop in my head. He has such a happy personality that draws you in. Then you add in the weres, the orb, prophetic dreams, puppetmasters, and my favorite creation of Faith McKay's=the Seasonals. They really drew me in! I LOVE them & can't wait to see more of them. I can't even begin to really describe them because, well, it's hard... just read the book, LoL.

The plot was really great... really original (with regards to everything I've ever read). The insanity of the situation with Sam & Violet's own mother wanting to kill them just keeps you on edge. I loved it. It was neat to see that they were literally in the middle of no where with really what feels like no connection to the "outside world."  I was a little surprised that Sam's dreams aren't more of a focus - I just expected her dreams to play more of a major role BUT that's what series are for right? :)

I was left hanging at the end with a lot of unanswered questions BUT I wasn't upset about it because this book is only a little over 200 pages. It felt like "part 1" of a longer novel instead of "book 1" of a series (if that makes any sense to anyone but me).  I don't mind it though - but it just makes me want book 2 sooner rather than later haha.

I love Sam & Nick, Zach & Violet. Great characters, interesting/original plot & setting, great supernatural beings like the weres, the Seasonals, and supernatural elements like puppetmaster & prophetic dreams. The Seasonals were insanely unique (at least as far as my experience with supernatural reads).

Overall, great read!! Highly recommend it to those that enjoy YA Urban Fantasy.

Email ThisBlogThis!Share to TwitterShare to FacebookShare to Pinterest
Labels: 4 Stars, Book Review, Message from the author, Review, Urban Fantasy, YA, YA Urban Fantasy