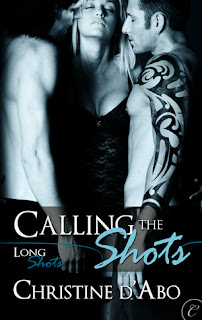 Calling the Shots
Long Shots #4
By Christine d'Abo
Genre - Erotia/Romance, MM, MF, MFM
Published October 8, 2012 by Carina Press
Format - ebook
180 Pages
Copy obtained from Net Galley
Synopsis via Goodreads:
He's had a wild ride, and now sex club owner Josh Scott is looking for a change of scene. But first, he's determined to bring two friends together, and he's willing to be a third wheel to move things along...

Beth Norris is eager to be set up with hot bartender Oliver Stephenson, but she's equally attracted to matchmaker Josh. Soon she's fantasizing about both men at once—and about being the one to call the shots in the encounter...

Ready to move on with his life post-divorce, Oliver is conflicted by the realization that he's attracted to women and men. Or more specifically, to Beth and Josh. He tries to keep his distance, but it's not long before the chemistry between the trio combusts in a night of mind-blowing sex.

In the light of day, it's clear something deeper than desire is growing between Josh, Beth and Oliver. But though Josh has helped others find love in unconventional relationships, is he willing to take a chance on one himself?


Find Calling the Shots on Goodreads,  Barnes & Noble or Amazon 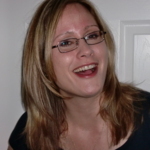 Multipublished author Christine d'Abo loves exploring the human condition through a romantic lens. She takes her characters on fantastical journeys that change their hearts and expand their minds. A self-professed sci-fi junkie, Christine can often be found chatting about her favorite shows and movies. When she's not writing, she can be found chasing after her children, dogs or husband.


My Review:
Christine D'Abo did a wonderful thing when she wrote Calling the Shots. I haven't read a book this hot in quite a while. The characters are fabulously refreshing. The plot is hot, suspenseful, full of mystery...did I say hot? I couldn't put this book down. The twists in the plot caught me completely off guard - which is a good thing! I get alittle annoyed when I've solved the mystery entirely too early but Christine kept me on my toes.

She writes in a way where you get completely attached to the characters and want the best for them - or the worst when it comes to the characters you hate. The male leads Josh & Oliver are oh so hot, tough but sweet. Beth, the female lead, is probably one of my favorite female leads of the year. She's soft but strong and as she learns to tap into her dominant side, you begin see her as this sexy, irresistible woman. Christine writes in a way that makes you feel like you're right there with the characters - learning and experiencing new things including what they like/want to do/fantasize about... Did I say this read was hot?? Just making sure...

There's MM, MF, MFM action throughout this read and the scenes are written fabulously. I'm usually not one for a lot of MM action - simply because I'm not usually attracted to MM action - but Christine writes the scenes in a way that makes it hot for any reader. You see through Beth's eyes and since Beth thinks it's hot, you swoon right along with her.

Great read! I didn't realize this was a series until after I got started.. I'm now going to go back and read the rest of the series!

Cover Rating:  5 Stars <--This is one of my favorite covers of the year!