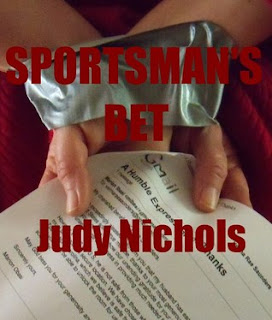 Synopsis via Judy's Website:
Velma Saunders, the town clerk of Tobias, North Carolina never had a kind word to say to anyone. In fact, most people were afraid of her, including her boss, Mayor Mike Ellis.

Still, the whole town is shocked when Velma's body is found in the Municipal Building's old bomb shelter. The only clue to her murderer is a copy of a cryptic message from a Nigerian Email scammer.

All the evidence points to Mayor Mike, who's charged with killing Velma. Investigator Ian Dodge, a British transplant who's never quite taken root in the Deep South,sets out to find out who else hated Velma enough to kill her.

In the course of his investigation, Ian discovers the dark secrets Velma has been hiding all these years, and exactly why she was so mean.

Sportsman’s Bet is Judy's third book and the first in the Ian Dodge detective series. Ian is a British national, living in a small town in rural North Carolina and stubbornly hanging on to every shred of his Britishness. Any resemblance to Ian Dodge and her own prickly British husband is purely intentional. 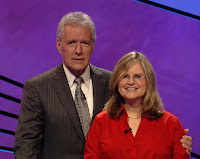 Judy is an Ohio transplant to Wilmington, North Carolina. She holds a bachelor's degree in journalism from Kent State University.She has been a newspaper reporter, a teacher, a temporary office worker, a customer service representative, and currently stay-at-home mom with way too much time on her hands. (And never mind the fact that her daughter is a year away from heading off to college). She started her novel Caviar Dreams while her daughter was napping one day. Five years later it was finished. The biggest challenge arrived when her daughter stopped taking napes and eventually lost interest in watching the "Toy Story" video. In April of 2012, Judy achieved her lifelong goal of appearing on the quiz show “Jeopardy!” She was a two day champion winning a total of $46,500 and the distinction of being officially named the smartest person in a room full of smart people. She's received two awards in her lifetime. Neither of them has anything to do with writing, but she is immensely proud of them nonetheless. Adia Temporary Agency presented her with the "Temp of the Month" award for March, 1987 and The Ohio Chapter of The Nature Conservancy gave her a Volunteer Appreciation Award in 1991. Her experience with The Nature Conservancy inspired her second novel Tree Huggers, about the deadly clash between an unscrupulous developer and a militant environmentalists, published in 2008.


A Few Questions for Judy:

Why did you decide to write mystery novels?
Why mystery novels? I'm a big fan of mysteries and thrillers. I've always liked starting with the crime and seeing if I can come up with the solution before the author reveals it and I've found I enjoy the challenge of coming up with the crime, the suspects, the red herrings and various plot twists. It's creating chaos and then bringing order to it.


Your website indicates that this is the first book in the Ian Dodge Detective Series. How many do you anticipate being in the series? When can we expect the next in the series?
I guess there will be as many Ian Dodge books as I can write. I'm working on the second one now which is titled "Trouble And Strife," Cockney rhyming slang for wife. In this one, the wife of a prominent lawyer dies from an allergic reaction suffered in a tanning bed. Was it a tragic accident, gross negligence on the part of the tannig salon, or was it murder? Ian Dodge investigates.
Did you have someone in mind when you created Ian's character?
Yes. Ian is based on my British husband Nigel, who's been living in the U.S. for more than half his life but hangs on to his Britishness. (He refuses to call that sport where you kick the round ball into a goal "Soccer." That's Football.) He's also speaks his mind and has no patience with fools. I have to ask because I can't help myself - how much fun was it to be on Jeopardy?
Being on Jeopardy! was the coolest thing ever. The best moment was going into the studio and seeing the set for the first time, with the podiums and the game board and the Jeoaprdy logo. I couldn't believe I was actually there and after years of watching it on television, I was playing it for real. And winning is fantastic. You get to be officially recognized as the smartest person in the room, and the room is full of smart people.


Is there anything you'd like for fans to know or a take home message you'd like to leave with them?
I like readers to know that I do my best to write characters and plots that could happen in the real world. I don't go in for high body counts or gory descriptions of murders and fight scenes. And I always like to include a scene where the victim is mourned. Even though I'm writing my books to entertain, I still feel there should be some kind of acknowledgement that when someone gets killed, they leave people behind.

My Review:
So mystery novels are not my usual genre, however, I loved this mystery. To be honest, the main reason I don't normally read mysteries is because I usually figure out "who did it" well before it's declared in the story... kinda defeats the purpose of reading the novel.... The fact that it all starts about by finding out she stole money just to help out an email scammer is intriguing. I mean, how many of those stupid emails do we get in our inbox a year - some of those stories really want to pull you in and that's what happens to poor ole Vilma.

Judy Nichols had me completely stumped!! I couldn't figure it out and it was driving me absolutely insane! At only 229, this read is relatively short but believe me when I say it didn't seem like it because you're constantly learning something new. Each chapter is pretty short but they're each almost individual key points in the mystery. You really come to care about poor Velma. The mean lady you thought she was is completely a misunderstanding. Vilma was judged as a mean ol' lady before we knew her background and what made her the way she was. Well, yes she's a little mean but you find out WHY she's the way she is and it completely changes your perception of her. The more you learn, the more you want to know who killed her and why! Of course I won't reveal the outcome but let me just say it's surprising.

The cast of main characters is fitting. I enjoyed reading from Ian Dodge's (love that name btw) point of view. He's a great lead character that you grow comfortable with. He's not an over the top detective but when he needs to be, he's a mystery solving machine. I'd love to read more stories about the detective tales of Ian.

Judy's writing style flows pretty smoothly. There's a lot of dialog that you read through - some of it gets a little boggy but I think if I read more of the mystery genre, the dialog wouldn't have bothered me as much. Lots of questioning and story telling... You learn alot of interesting new facts during the dialog and during the dialog is when you learn so much about Vilma.

Even though this isn't my normal genre, I have to recommend this read to others whether you like mystery novels or not.

Cover Rating:  2.5 Stars
If I was to pass this cover on the bookshelf, I wouldn't think twice about passing it up :( BUT I do love how the email is scrunched in the person's hands - that is a neat touch for the cover.

Plot: 5 Stars
I mean really... if anyone figured out who the killer was early on, you're brilliant because I sure as heck didn't