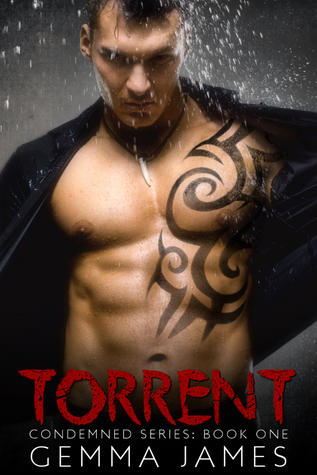 *Ebook obtained as part of the tour in exchange for an honest review*
Synopsis via Goodreads:

I’ve been obsessed with Rafe Mason since I was thirteen. The twisted part of this story is that I still want him, even now.

Now that he’s holding me captive on an island.

Rafe has his reasons for doing what he’s doing, and if I’m honest, I can’t blame him. I’m the girl who sent him to prison for a heinous crime he didn’t commit.

But now he’s free and the tables have turned…now he’s the one driven by obsession.


TORRENT is a new adult dark romance with disturbing themes and explicit content that includes sexual situations and violence. Intended for adult readers 18+ only. Part one of the CONDEMNED series. This is not a stand-alone read.

Gemma James (a pseudonym for Christina Jean Michaels) loves to explore the darker side of sex in her fiction. She’s morbidly curious about anything dark and edgy and enjoys exploring the deviant side of human nature. Her stories have been described as being “not for the faint of heart.” She lives with her husband and their four children—three rambunctious UFC/wrestling-loving boys and one girl who steals everyone’s attention. Sign up for her newsletter so you don’t miss out on future releases!

Okay, sorry. What I can say? A yummy cover really grabs me. ;)

The absolute beginning of Torrent had me going, "Wahhh?" I wondered if I was actually going to like this novel knowing how damaged the characters really were. I mean, it starts off with a BANG. Warning to readers: rape does play a significant role in the novel. I wasn't expecting it but it plays into the plot because it's what changed the characters. I just wasn't mentally & emotionally quite prepared for it. But overall, it does create the characters.

Once I moved past the disturbing aspect of what was actually going on, I started really getting into Torrent. There are more violent aspects in the novel like choking and chaining in the basement.

This novel was chocked full of anger, angst & sadness. I really didn't like the addition of the son... I thought it was a little pointless right now but I'm wondering if it'll mean something more as the series continues.

The climax was nail biting and I was really surprised and caught off guard by the outcome. Needless to say, book 2 is going to be CRAZY. I cannot wait to see what happens.

So overall rating? Hmm... I'd have to give this one a 4 stars. It truly did grab me after a point and I loved reading the novel. I also really became attached to the characters.