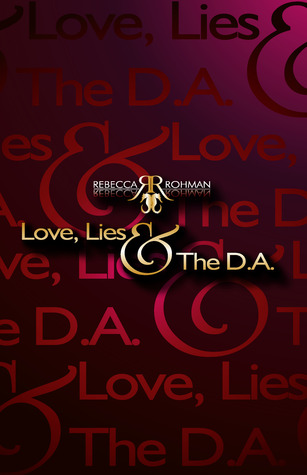 Jada McLean is about to get married in nine days, when she walks in on her fiancé in a little more than a compromising position. Days later, she’s on a trip that she intends to be relaxing and a prelude to her fresh start, when she runs into the rude, obnoxious, but gorgeous Jonathan Kole.

Jonathan Kole is San Francisco’s newest District Attorney. When he finds himself deeply attracted to a stunning beauty, he has no idea that she’s about to get into BIG trouble with the law—and he’ll be the one presiding over her trial. To make matters worse, his father is the lawyer representing her in the high-profile case.

When a series of events force them together over New Year’s weekend, Jonathan’s feelings and ethics will come into question, while Jada comes to terms with the fact that she is falling for the man that will be responsible for attempting to put her behind bars… Little do they know, they're both about to fall into a whirlwind so deep, it will send both their lives spiraling out of control.

Rebecca Rohman is a wife and designer currently living in the Northeastern United States. She was a Sales Manager for a tourist magazine, and for many years prior, she was involved in marketing for a jewelry company, and later for a fine wine distributor.

About fifteen years ago, she started writing her first romance novel, Uncorked, just to purely entertain herself. It was not until early in 2012 when she decided to complete it and share it with the world. The story was published in February of 2013. Love, Lies & The D.A. is her second novel.

I worked on this book for the last year and the whole time, I could hear my mentor’s voice in my head.
“Telling not showing,” she’d say, or “I’m not convinced… not feeling it here.”
With this book I pushed myself, and tried to blow everything I knew I was guilty of with my first book (at least during the writing phase), out the park. My aim was to make the reader and my mentor, laugh and cry. I want readers to feel happy and sad, and at times I want them to feel angry—I want them to experience what the characters feel.

I’ve always had the most difficult time being funny in my writing and it was something I really strived to do in certain parts of this book. I think I’ve succeeded—it’s up to bookworms out there to decide . I’m silly, I laugh at my own jokes and depending on my husband to tell me if something was funny or not in a romance novel, was a complete waste of time.

He always gave the same blah response, “It’s cute.”
Not necessarily what you want to hear when attempting to write a funny scene.
The scenes where I wanted to evoke tears were the most difficult however. I had to get myself in “the zone”. That meant privacy, quiet, soft or no music, then I’d put myself in my characters shoes and I’d imagine how they’d feel.

In some instances, it was as simple as going back to a sad time in my life, but in others, I used my own fears— how I thought I would react in a given situation to write those scenes. I thought if I felt what the characters did; it would translate to the readers too. When I found myself bawling while my fingertips scrambled across the keyboard, I truly believed I would succeed in roping the reader in.

My aim was to keep readers engaged from page one all the way to the very end. Love, Lies & The D.A. will take people through a myriad of emotions—from lighthearted moments, to intense situations, from close encounters to steamy love scenes. Readers will laugh, and they will cry. I hope they thoroughly enjoy the heartwarming and sometimes heart-wrenching journey that Jada and Jonathan go through as they turn through the pages of my book.

The pretty, young host escorts me to a table for two near a window with panoramic water vistas. Within minutes, a server takes my order. As my café latté arrives, I can’t help but overhear a rude exchange between a man and his leggy blonde with the host that escorted me to my seat.
“Look, I reserved that exact seat yesterday,” he says.
“I apologize sir, but that seat is not available,” the host replies.
“Well, if you were doing your job in the first place, it would be available to me, wouldn’t it?”
“Sir, I’m sorry for the error, but it wasn’t written here. If you like, you can wait at the bar where I’ll be happy to serve you a complimentary beverage of your choice while you wait, or I can accommodate you at an available table now.”
I can’t help but look to see who this asshole is.
Everything about him smells of money. From the designer jeans that hug his ass, all the way to the Jaeger Reverso watch that graces his wrist. He’s hot—probably in his mid to late thirties, tall, broad shoulders, piercing grey eyes, and a head of black hair like I’ve never seen.
Ordinarily, I might have found him attractive, if only he would just shut up.
Everything he says to that poor young girl, who has tried so hard to rectify someone else’s mistake, pisses me off. He’s been nothing but rude and condescending. As I look up, my eyes land straight on his. Then I realize they’re all looking my way. I turn around to look behind me, but there is no one. Then it dawns on me that he’s arguing with the host about my seat.
My meal arrives. I mind my business, and I proceed to enjoy it. Before I know it, I see him approaching my table. I pretend not to notice and focus all my attention on my lemon ricotta pancakes before me, but within seconds, he stands beside me.
“Excuse me, my name is Jonathan Kole. Would you mind terribly if you were seated elsewhere?”
My eyes travel across my pancakes to his broad thighs, to his crotch, and to what I suspect is an extremely trimmed stomach beyond his black ribbed sweater. Then I stare into his grey eyes in silence.
“You see, my girlfriend and I met right here at this table a year ago, and I wanted to propose to her. Here. Today.”
“Actually, Jonathan, I do mind. Seeing that I’m enjoying my meal, surely you wouldn’t mind waiting until I’m done. Or perhaps you can let that polite host, who has done everything possible to accommodate you, have you seated elsewhere.”
“Do you have any idea who I am?” he asks.
Asshole! Your name might sound familiar but who cares…
“No. You could be the king of England and I wouldn’t give a damn.”
“Who the hell do you think you are?”
“You really want to know?” I ask quietly.
He lowers his head slightly, as if he’s seriously interested.
“I am a woman who walked in on her fiancé screwing her best friend one week before her wedding, so forgive me if I’m not in a sentimental mood.”
His mouth drops open at my response.
“Now, if you’ll excuse me, Mr. Kole, I’d really like to enjoy my brunch.”
His piercing grey eyes are glaring into mine. I know he’s angry. His temple pulsates as he stares at me. He walks away completely flushed.
I don’t care. Perhaps if he had been nicer to that host I would have considered his request.  However, because he comes from money doesn’t give him the right to speak to people any which way he wishes.
I continue to enjoy my meal and notice him walking hand in hand to the bar with Malibu Barbie. Half an hour later, I ask for the check then purposely make him wait an additional five minutes before I leave.
On the way out, the host looks at me bright-eyed. “No one ever speaks to Mr. Kole that way, Miss McLean.”
“Well, it’s time someone taught him some manners,” I reply. I hand her a healthy tip, and I’m on my way.

Love, Lies & the DA was such a great novel! I have to admit that it started out paced great, then it slowed down a tad but before long, I couldn't turn the pages fast enough for my racing heart!

Jada and Jonathan are great characters. I loved their attitude and independence. They both had fight in them that I loved to see throughout the pages. They were both extremely likable characters and stood their own ground. There was something about Jonathan that had me wanting him on every page. Even though, when we first see him, we think he's a jerk, we find out later that scene, from his PoV, was the complete opposite of what we saw from Jada's PoV. I loved that little reveal. <3 There were so many supporting characters that I enjoyed as well - like Charles.

The plot deals with deception, adultery, crime, murder, love, hate, revenge, anger, sadness, loss, and finding the light at the end of the deep, dark tunnel. Like I said before, it started out paced great, then slowed down and I was a tiny bit bored because nothing exciting was happening, and then BAM! I couldn't turn the pages fast enough. Overall, I have to say the plot seemed well thought out & pieced together quite well. I was really invested in the story and wanted to know how it would all end!

Overall, great novel & I look forward to reading more from this author.