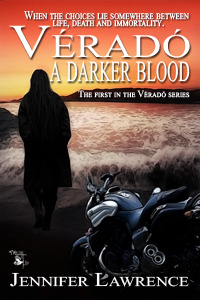 A cocktail of romance, passion, and blood lust greet Nicole Silverson as she ventures to the sun-drenched Mediterranean island of Crete.

Nicole has a passion for the paranormal, and it’s that passion that prompts a stay in the wild party resort of Malia.

In her quest to gain information and make new friends, she falls in with several of the town’s bar-staff and night-workers. After witnessing the gruesome death of two strangers, Nicole becomes unwittingly initiated into the secret society that her new friends tried to spare her from. She becomes a Véradó —a mortal, willing to sustain a coven of vampires with her blood.Within the spellbinding walls of an ancient courtyard bar named Zeus Xenia.

Marshall is the vampire dominating a coven of four. He is strong, proud, respected, and feared. His motives are never questioned and his loyalties are fathomless. Nicole becomes his Véradó and the compulsion drawing her to him tests his self control to its lethal limit. 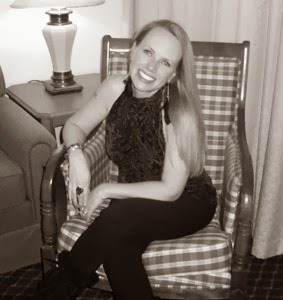 Having spent my life in the heart of England, I am truly English to the core and love to embrace all of the traditions this country has to offer.

After spending ten years working in digital imaging, imagery has come to mean everything to me and I try to get that across in my storytelling.

Next to writing, my other great passions are amateur photography and very amateur ghost hunting. My husband, kids, and cats keep me on my toes, but when I do get time to myself, I love to light a few candles, relax, and immerse myself in my writing.

I needed a new vampire novel to sink my teeth into and this was a pretty good one.

I loved the setting if Crete - the beaches and the partying. I did become a little exhausted with the alcohol consumption though. With the characters working at a bar, you'd think they'd get tired of drinking. That's literally all it seemed they did. Drink, party, lay out on the beach, and then hang out with the vampires. Ha. When I put it that way, it actually sounds pretty nice, right?

This isn't your usual vampire novel. Yes, they drink blood. Yes, they're insanely attractive. They're mysterious and dangerous. They have a secretive side. The cool thing-they can walk in another realm where the dead souls are. They don't do it often but it does come in handy a time or two.

I liked Nicole's character but I have to admit that Marshall and a few others seemed a little flat. Anna was by far my favorite character. Their characters didn't seem to have much... Much dimension or attitude. They just seemed like they were on "cool" constantly. Even despite that, I liked them. It sort of worked for them but I would've loved to have seen more spunk or life (yea, they're vampires but you know what I mean) from them.

The events leading up to the ending made me all teary eyed but I did like the ending. It took me completely by surprise. I mean, I had some series gasping moments there in the last handful of chapters.

The mystery aspect was a great distraction that I liked as well. It was kind of a like a side story that went along with the main one. I was constantly thinking about "who, what, why..." in the back of my mind.

Overall, it was a good read & if you're in need of a new vampire novel, definitely grab this one.