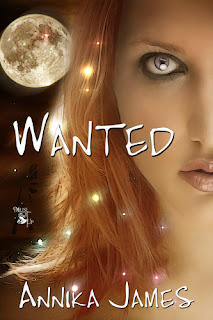 Attacked as a young witch and left for dead, Ashlinn is deathly afraid of being bitten again. Having survived until she’s almost eighteen without donating blood to any of her vamp friends, Ashlinn figures she’ll continue to live bite-free. After her crush reveals how powerful she is, however, the Vampire Council declares she be claimed as a familiar, which requires biting. Ashlinn doesn’t want to be owned, even by hot vamp, Conor. Luckily, her best friend, Matt, volunteers for the job. She is given one week to choose her protector, and the list of willing biters keeps growing. Will she go with best friend Matt, hot vamp Conor, or someone else to protect her? Will she be able to get her power under control by then? Will she overcome her phobia of being bitten? And who says she needs to be protected, anyhow?

Annika James lives in small-town Wisconsin with her husband and two beautiful kiddos. She spends her days working to pay the bills and her nights dreaming of more fun ways to do so. Her passions include writing, reading, music and traveling with her family. She dreams of a world where vampires and powerful witches really exist, because life would be so much more interesting. 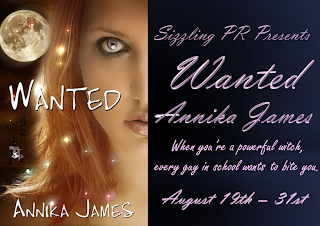 I could tell he was still looking down at me. His hand rested on the shelf next


to my head and his other hand came up on the other side, trapping me between his arms. I looked up shyly. How many times had I pictured being alone with Conor? It was like a dream, and I was frozen, unsure of what to do, unsure of what he wanted from me. What was he playing at?


He leaned toward me, holding my gaze with his. I forgot how to breathe, how


to think. Then his lips touched mine, electricity exploding up and down my body.


Soft and gentle, they probed, tasting, testing. I didn’t move to touch him, just


remained frozen. There was only the kiss. His mouth moved to my jaw, kissing his


way down to my neck. His teeth grazed my skin.


I unfroze and found my voice. “No!” I felt a surge of power push through me.


Conor flew backward across the room. He crashed into a bookcase, sending an


avalanche of books over him as he fell to the floor. He slumped there, holding his head, dazed. He looked up in confusion, mouth opened ready to speak. At that moment, my muscles remembered how to move and I ran for the door. It opened in front of me, not of my power, and Matt appeared. He’d probably felt my surge of power. I hadn’t meant to throw Conor. Panic had overtaken me and I had lost control for an instant.


I flew into Matt’s arms and he embraced me. Matt was my rock. His presence


calmed me, it always did. He was like a protective big brother. I knew he


understood the whole scene in the seconds before I’d found his arms. I buried my


face in the T-shirt pulled tight across his strong chest, and breathed in his scent, a


mix of fabric softener and cologne. It was familiarity, it was home, and it helped to center me. I peeked out at Conor. He stepped out of the pile of books and

Wanted pulled me in from the synopsis so I was very excited to dig into this novel. During the first few chapters, I wasn't pulled right in though. It took a few chapters before I became really invested in the story. I'm not sure why that was exactly... it may have just simply been getting used to the setting. Overall, this seemed like a short read. I read the entire thing in one sitting because once I was invested in the characters, I didn't want to stop reading.

Ashlinn goes to a school where there are vampires, witches, and humans mingling together. Her best friends are both vampires and she's a witch. I really enjoyed Cora & Matt. They were both great characters. Conor...swoon. Of course he's the guy who holds Ashlinn's attention - The vampire who she's had a crush so deep that it's hard for her to explain why she feels such a connection with him.

The story takes an unexpected twist that throws everyone into a serious whirlwind of action. In order to ensure vampires from all over don't begin to basically throw themselves on Ashlinn, she must become a vampire's familiar by the end of the week. It's awesome that she was realizing that she was obviously quite powerful....however, it came with the cost of having to become a familiar. I thought it was an interesting plot twist and I couldn't wait to see how it turned out.

And...enter the triangle of sorts... Ashlinn must decide if she's going to become Matt's familiar (her trusty best friend / protector) or Conor's (hot crush who is trying to prove his honestly and gain her trust). Cora is her anchor through everything and I really appreciated having her character there (even though she wasn't a huge focal point). Conor tries to prove himself to Ashlinn and, honestly, I thought it was going to be a ruse and there would be something sinister behind his intent. Matt, her best friend and protector, tries to separate his emotions from the situation and give Ashlinn what he thinks she wants overall... but things just don't go the way any of them are expecting :)

Now, the story was full of plot twists and huge surprises. I won't ruin them for everyone so I'll just say that they were GREAT surprises - even the ones that were related to negative events.

The ending... Holy freaking crap. Seriously??!?! That's where it ended?!?! I want to know if this novel is going to be part of a series? I'll be honest and say that one premonition and then the ending, suggested that this novel could be a fabulous New Adult, more mature YA, nearly adult type novel that I would totally swoon over. Jeewiz. Seriously? I can't believe it ended where it did. I kept trying to flip the ebook's page but it was the end!!!!


a Rafflecopter giveaway
By Kayla's Place at August 31, 2013