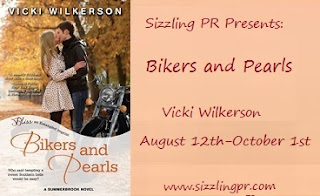 I'm happy to be a part of the Sizzling PR Tour for Bikers & Pearls today!

First, I'll tell you all about Vicki & her novel, Bikers & Pearls!

Next, you can check out my interview with Vicki!

Last, but definitely not least, check out an excerpt from Bikers & Pearls! Who said tempting a sweet Southern belle would be easy?

When rebel biker Bullworth Clayton gets tangled up with pastel-and-pearls-clad April Church, sparks fly. Sure, April would clearly rather work with anyone else, but if teaming up with Bull means a successful charity event for a sick little boy they both care about, then so be it.

April is baffled at how drawn she is to the leather-wearing, tattooed Bull—he just doesn’t fit with her simple, safe, country-club life. And as much as the handsomely rugged man tempts her, she still can’t shake the images of the tragic motorcycle accident from her past, which left her scarred and her father broken.

Bull tempts her to don a pair of leather pants and go for a ride with him, while April desperately tries to resist her attraction to the wild side and keep her exploits hidden from her small town. Will they be able to navigate their differences and find a middle road to love? 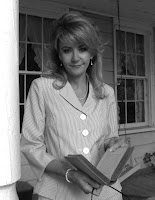 Vicki is a native of the Charleston, South Carolina, Lowcountry and loves to share her enchantment with the area with readers through her writing. Even in childhood, she enjoyed penning stories and poems—no doubt fueled by her grandfather's enthusiasm for telling tales himself. Where else—but in the South—could one find the interesting blend of salt water, eerie swamps, unwritten traditions and unique characters? In her spare time, she loves traveling, spending weekends at her family's lake house, playing golf and cooking (with lots of wine).

Tell me a little bit about yourself. What do you like readers to know about the author behind the pages?
The most interesting thing about me as an author is that I was born and raised in the South Carolina Lowcountry around Charleston. Why, you ask, is that interesting? Well, if you are ever blessed to spend any time in this area, you’d find out. The Lowcountry is filled with “characters.” Every place I turn I find unique people doing unusual things. And in one of the most beautiful places on earth. This place is fodder for a writer’s imagination, and the ideas and characters keep turning up everywhere I go. I am inspired by Charleston and the surrounding Lowcountry, and I want to share my love of this place and its people with readers.

Who are your role models with regards to life as an author & your writing? Have you met them yet?
My role models are Dorothea Benton Frank and Pat Conroy. And, yes, I was fortunate enough to meet Dorothea when I wrote a review for one of her novels and was invited to a soiree at her home on Sullivan’s Island by her publicist. It was such an honor, and just as I was preventing myself from grabbing my chest and gasping, she grabbed hers and gasped when someone introduced me as “the critic who reviewed your book for the Charleston Post & Courier.” I nearly fainted! The review had not been published at that time, so I had to tell her she had no worries and that the review was good. The book was actually fabulous. And  Dorothea was so sweet, lovely and gracious—just as I had imagined. Now I “get” why authors get nervous about their books. They are our “babies” and we want people to like them.

Now, to Pat Conroy. I’ve always had a writing crush on him. If only I could write like him! I love the way he puts words together so eloquently and makes me feel like I was actually present in his settings. He attends a number of local writing functions, so it’s possible that we may cross paths one day. Fingers crossed.

What do you do to get into your “zone” when you’re trying to fill pages & create a new world?
Hard work, research and plotting are the things that get me ready to write. Before word number one gets onto a page, I’ve started a notebook with an outline of the story; I’ve done quite a bit of technical research (like on motorcycles with Bikers and Pearls), and I’ve brainstormed ideas for scenes, settings and names for my characters. So, I don’t sit down to a desk with an empty computer screen. I am surrounded by all my hard work, and when I get to a sticking place, I simply look at the pages, catalogues, pictures, printouts and the notebook I have on my desk.

Do you have any quirky habits that you have to do when you’re writing? A certain spot/chair/seat, a certain song you have to listen to before getting started, a drink, etc.
My quirky habit is actually a scientific behavioral device—like in Pavlov’s dogs—classical conditioning—when you use something to trigger an unrelated behavior. So, I light a scented candle—one that I will only use with a particular book. I used a ginger candle with Bikers and Pearls, and I’m using a huckleberry candle with the second book in the Summerbrook Series. Now, whenever I smell ginger, I think of April and Bullworth (Bull) from Bikers and Pearls

What are the first five words that come to your mind when you think about Bikers & Pearls?
Funny…sweet…acceptance…leather…skirts

Where did you get the idea for this story? A dream? A passing thought? A light bulb moment? A fantasy?
Most of my ideas for books start with a message or theme I’d like to share with the reader. I am a former English teacher, journalist, and inspirational speaker, so that combination of things in me drives me to want help others make their lives better—to illuminate things in society that need to be addressed. For Bikers and Pearls, I saw people judging others, and I wanted to show them—in a light, humorous way—that the outsides of individuals don’t matter. Sometimes we overlook people who would make wonderful friends (or more) if we don’t take the time to see what truly makes them who they are.

Introduce us to a few of characters – who are they from their own perspective?
April: “I thought I was just being careful. My goodness. Just look what I went through as a child—a fatal collision with a biker, a head injury that still affects me, and a father who is crippled. I needed to be careful. But everything changed when I met Bull. Now? I don’t care that he used to belong to Rebel Angels. Or that he’s done things even he regrets. He’s my hero."

Bullworth (Bull): I simply wanted to have fun. You know, needle April a little—give her something to think about. She was NEVER going to get on the back of my Harley and ride off into the sunset with me—not with her…skirts…and pearls. But then I got to know her. I saw her face her fears to help Ben, the sick little boy we both love, and I couldn’t help myself any longer. And I had to fix some things about me, too. Now? She’s…she’s…well, she’s my April.

Do you have a favorite scene that you’d like to share a tiny bit about? Just a teensy little excerpt or quote?
April had been apprehensive of Bull—until one night when something nearly disastrous happened and he saved her. But the trauma of the evening wouldn’t let her sleep. That’s where this excerpt comes from:

“…she had an idea. She got up, walked over to the chair, grabbed Bull’s jacket from the back, and climbed into bed once again.


She pulled the leather to her face and took in the scent. The dark spices lingered. She held the jacket close like a security blanket. It held warmth and safety in its arms, and in moments she was asleep…”

The cover is wonderful. Would you like to tell everyone who created it?
Jessica Cantor is a graphic designer from Boston. Isn’t she awesome? She has a fresh eye for design and wonderful ideas. Her website is http://www.jessicacantor.com .


If readers would like to know more about the “Summerbrook” area and life in the deep South, I’d like to invite them to my website where I share my own Southern recipes, photos and advice about places to visit around Charleston, South Carolina. I also share some of my “philosophy” and lots of other Southern stuff.

Use the Rafflecopter below to enter to win this Sterling Silver White Freshwater Pearl Necklace.
US ONLY
*Tour Wide Giveaway* 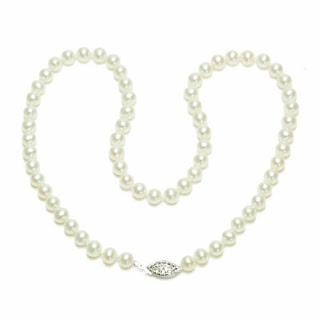 
Motorcycles were everywhere. April Church had never seen so many in one place in her entire life. Row after row and side by side, they had been lined up like opposing armies. Was there some kind of biker rally in town that she didn’t know about? No. That couldn’t be. Surely, something like that would have been announced in the Summerbrook Gazette.


She looked for a well-lit parking spot near the door of the buffet steakhouse, but after circling the bikes three times, she finally squeezed her car into the last space at the rear of the dark lot. Motorcycles flanked both sides of her car. Flames embellished the tank of the bike immediately to her left and razors decorated the one to her right.