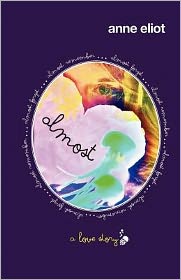 Almost
by Anne Eliot
YA Romance
Published by Butterfly Books
on February 1, 2012

At a freshman party she doesn't remember, Jess Jordan was almost raped.

...Almost. Very nearly. Not quite. Three years later, Jess has managed to make everyone believe she's better. Over it. Because she is.

...Almost. Very nearly. Not quite.

Unfortunately, until Jess proves she's back to normal activities, her parents won't discuss college. So, she lands a summer internship and strikes a deal with hockey jock, Gray Porter: He gets $8,000. She gets a fake boyfriend and a social life.

Jess has no idea Gray signed on for reasons other than money. She also never expects to fall in love. But Gray’s amazingly hot, holds her hand all the time, and makes her forget that he’s simply doing his job. It’s like having a real boyfriend.

...Almost. Very nearly. Not quite.

Gray Porter is hiding secrets of his own. About Jess Jordan. About why he’s driven to protect her, why he won't cash her checks, or deny her anything she asks.

"No matter what, please don’t let what happened define who you are, take your future, or allow it to defeat your beautiful spirit."

Highlighting the struggles of young women "almost" raped isn't something discussed often. One can say "you were a very lucky girl" and that might be true to an extent but something traumatic still occurred. These young ladies will still struggle with what happened - and so will their families, friends and those who wished they could've done more to help.

I loved this story. My heart was broken, rebuilt, soared, broken again, and finally, all the prices were put back together again. Gray & Jess are fabulous characters and, as a reader, you root for them to overcome their struggles.