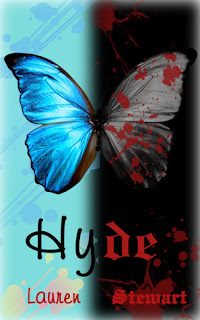 To survive, they must embrace what they most despise . . . in themselves and each other.

*** This novel is intended for adults only, as it includes lots of cursing, descriptive sex, biting sarcasm, and themes similar to those in Stevenson’s Strange Case of Dr. Jekyll and Mr. Hyde, from which this story was inspired.

This book was a breath of fresh air. I absolutely love paranormal romances: vampires, weres, demons, etc... I've never read something like this before though. It's hard to come across good reads that are creative and original - the likes of something I've not read before, but Lauren does it! This spin on the "Jekyll and Hyde" concept makes for such a fresh, suspenseful romance. This book could've been written wrong... but Lauren Stewart did it right.

Lauren created really strong characters. They have their own personalities and they are both strong willed when they need to be. Mitch Turner - he is the good looking guy who thinks he's a horrible monster because of his "Hyde" side but he's really the good guy. You get attached to Mitch throughout the story because he's the big, bad tough, sarcastic character who just wants to push everyone away for their own safety... who of course has a soft side that shows for brief moments at a time. Those brief moments suck you in completely. He acts like such a jerk because he thinks it helps control his, what I'll call, "Hyde outbreaks." Then you have Eden Colfax - she's the girl with the onset of problems that she needs help with and the only person who can actually help her is Mitch.  She thinks her life is working out okay until her "Hyde outbreaks" start occurring and she ends up on Mitch's doorstep a few times with only a few memory flashes that trickle in after the fact. Of course they banter back and forth... it's the hate relationship that you, the reader, just want them to get over because deep down, you, the reader, know that they should get over themselves and just be together. Then of course we have to have the "bad" guy in the story. Those characters are just beginning to become known but for this first book, you have Jolie... she's the character we all love to hate and despise because, even though it's not exposed in the beginning, you automatically get the feeling she's up to no good. Then there's Carter - who you think is a great guy but start seeing something going on behind the scenes... you don't know if he's still a good guy or if he needs to start falling in the bad guy category...

Overall, "Hyde" has paranormal characters with suspense, mystery, romance, great sex scenes that make you want to re-read before moving on to the next chapters (not to mention, make you extremely envious of Eden), confrontations, danger, death, twists, turns... There's a little of it all in "Hyde." It really makes you explore what you really think are the dark and light sides of people... those you might think are dark (or those characters who consider themselves dark), turn out to be light and vice versa... There's moments of pain and moments of passion that will leave you breathless and wanting the pages to be turned faster than your eyes can keep up with...