ARC Review: Theirs to Take (Blasphemy #3) by @LauraKayeAuthor 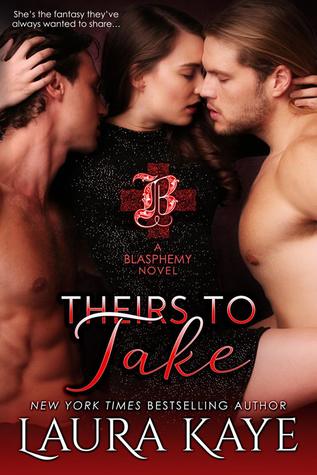 Theirs to Take
Blasphemy #3
by Laura Kaye
Published Sept 26, 2017
**ARC received directly from the author
in exchange for an honest review**

Best friends Jonathan Allen and Cruz Ramos share almost everything—a history in the Navy, their sailboat building and restoration business, and the desire to dominate a woman together, which they do at Baltimore’s exclusive club, Blasphemy. Now if they could find someone who wants to play for keeps…

All Hartley Farren has in the world is the charter sailing business she inherited from her beloved father. So when a storm damages her boat, she throws herself on the mercy of business acquaintances to do the repairs—stat. She never expected to find herself desiring the sexy, hard-bodied builders, but being around Jonathan and Cruz reminds Hartley of how much she longs for connection. If only she could decide which man she wants to pursue more…

Laura Kaye is the New York Times and USA Today Bestselling author of contemporary and erotic romance and romantic suspense, including the Hard Ink, Raven Riders, Blasphemy, Heroes, and Hearts of the Anemoi series. Laura's hot, heartfelt stories are all about the universal desire for a place to belong. Laura grew up amidst family lore involving angels, ghosts, and evil-eye curses, cementing her life-long fascination with storytelling and the supernatural. Laura also writes historical fiction as Laura Kamoie, and lives in Maryland with her husband and two daughters, and appreciates her view of the Chesapeake Bay every day.
Join Laura Kaye's Newsletter - smarturl.it/subscribeLauraKaye - to Receive:
*New release alerts *News about contests and giveaways *Sneak peeks and teasers *Early cover reveals *The most up-to-date book news and new releases *Book signings and appearances *Online events for readers *Upcoming sales

Hartley is the female lead that we all would wish for. She's independent, strong, and no where near the whiny female found in a lot of books these days. She's... normal. I feel like I could go to this town and walk up to her, start a conversation, and then beg her for the inside edition to the relationship between her and the sexy duo that is Jonathan and Cruz.

I love this series because I love the idea of these guys being part owners in the club, Blasphemy. It's an underground world that is foreign for my country girl, Louisiana small-town self. I love to be immersed in this world.

Overall, great read. If you've enjoyed the other two books in this series, you won't be disappointed with this one. You even get to see a few of the other characters.