The Otherword Assassin #2.5
by Gena Showalter
*ARC received via Netgalley in exchange for an honest review* 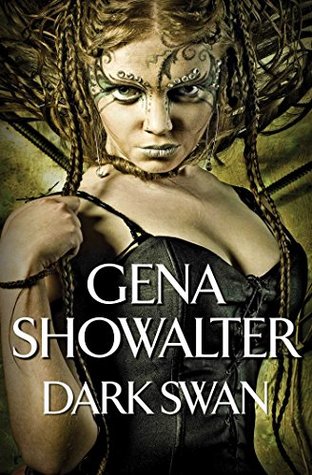 
The Alien Huntress series is back with fan favorite AIR agent Dallas Gutierrez from New York Times and USA TODAY bestselling paranormal romance author Gena Showalter, who doesn’t disappoint with this sizzling hot alpha hero.Lilica Swan isn’t quite human or otherworlder; she is the best—and worst—of both.She is willing to do whatever proves necessary to save her sister from the seductive and deadly Alien Investigation and Removal agent, Dallas Gutierrez, even bonding her lifeforce to his by effectively marrying him. But the bond will fade without consummation. Can Dallas resist his insatiable desire for the powerful beauty? Or will she lead to his ultimate downfall?

I was hesitant to start Dark Swan because it's been so long since I've read the others books in the Otherworld Assassin series. I'm so glad I jumped right back to it. It was so easy to just fall right back into the world that Gena created in this series. The characters are so magnetic, aggressive but charming in this... gritty sort of way. Lilica (such an awesome name) is such a well crafted, head strong character. You want her to conquer the world. Save her sister who has lost her way. She and her sisters lived one hell of a life... if you can even call it a living. Lab rats basically. Enter Dallas... sigh worthy, gritty, sexy Dallas. He lived a hellish life as well. They make an add pairing but you can't seem to get enough of them when Lilica accidentally bonds them together.

I was sad that this wasn't a long, full length novel. Being a 2.5, these were two characters that I would've read a 500 page novel on just because I couldn't seem to get enough of them.

Overall Rating: 4.5 Stars
Cover Rating: 3 Stars
Plot: 5 Stars - Plenty of ups, downs, highs & lows. You cheer & you rail for and at the characters.
Climax: 5 Stars! Crazy how the power was there all along.
Ending: 5 Stars (I was so sad that it was wrapping up and ending. Pretty sure I pouted aloud as I read the last few pages.)