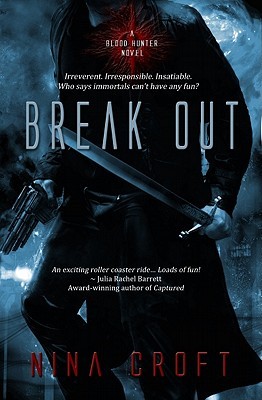 The year is 3048, Earth is no longer habitable, and man has fled to the stars where they've discovered the secret of immortality—Meridian. Unfortunately, the radioactive mineral is exorbitantly expensive and only available to a select few. A new class comprised of the super rich and immortal soon evolves. The Collective, as they're called, rule the universe.

Two-thousand-year-old Ricardo Sanchez, vampire and rogue pilot of the space cruiser, El Cazador, can't resist two things: gorgeous women and impossible jobs. When beautiful Skylar Rossaria approaches him to break a prisoner out of the Collective's maximum security prison on Trakis One, Rico jumps at the chance. Being hunted by the Collective has never been so dangerous—or so fun.

Nina Croft grew up in the north of England. After training as an accountant, she spent four years working as a volunteer in Zambia, which left her with a love of the sun and a dislike of nine-to-five work. She then spent a number of years mixing travel (whenever possible) with work (whenever necessary) but has now settled down to a life of writing and picking almonds on a remote farm in the mountains of southern Spain. 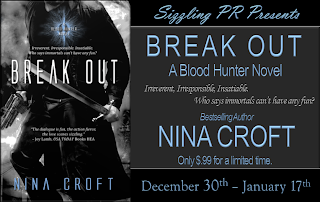 2
“Mr. Sanchez—Rico—”
“Sit.”
Had she really thought his voice sounded like warm honey? That one word cut through the air like ice. She didn’t even have to think about it. She sat right down. Her lips were suddenly dry, and she ran the tip of her tongue over them.
“Is there a problem?” She decided that the squeak in her voice was quite allowable within the parameters of her character.
He strolled into the room, one hand resting on the laser pistol at his thigh, and came to a halt in front of her chair, far too close. He was tall. And broad. And menacing. She licked her lips again.
“Just a small one.”
“Well, I’m sure we can sort it out.” When Rico didn’t rush to agree with her, she decided to give the bimbo smile another try. Her dry lips stretched across her teeth in what she hoped would bring an answering smile from Rico.
He grinned, but for some reason it didn’t make Skylar feel any better at all. “Oh, I’m sure we can.” His smile broadened and the tip of one white fang showed briefly.
Skylar’s heart stopped. Then started again, so loudly she could hear the blood thundering in her veins.
Holy Meridian. What the hell was this guy?
Her mind flashed back to the rumors she’d heard about him, rumors she had ignored as too ludicrous to even consider. Just legends dredged up from the past.
She forced herself to take a deep breath. He could be any number of things. One rather large tooth did not mean he was a….
He reached up and slipped the shades from his eyes. His gaze locked with hers, and ice-cold prickles skittered down her spine. “Er—I just have to pop back to my shuttle for a moment.” She stumbled to her feet. “I forgot to—”
She closed her mouth as he continued to stare at her out of those crimson eyes. Who, or rather what, had eyes the color of blood?
He reached out a hand, placed one finger on her shoulder, and pushed her down. Closing her eyes, she tried to remember her training. What to do if caught. What to do if facing torture. Unfortunately, nothing was coming to mind.
Taking a few deep breaths, she pushed her fear to the back of her mind. She knew they wanted the money. She just had to hope that they wanted the money more than Rico wanted—
Again, her mind refused to finish the sentence. After all, she didn’t actually know what he wanted.
He licked his lips, ran his tongue over one sharp white fang, and stepped toward her.
Okay. She didn’t know, but her mind was doing a good job of guessing. Or a bad job.
She shook her head, took another deep breath, and sat up straight. “So,” she said and was proud of how normal her voice came out, “this problem… Are you going to tell me what it is, or are you just going to stand over me and drool?”

Scavenger hunt quote: “Apparently, if he doesn’t get sex on a regular basis, he goes all dark and scary.”

Nina is giving away a $25 Amazon gift card and this necklace.