Check out the new yummy cover for Forever Freed!!!! 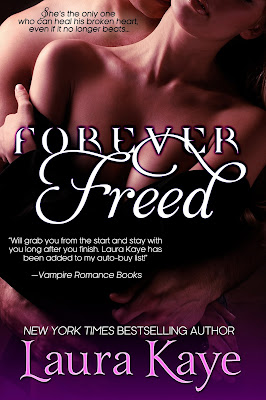 
A heart can break, even one that no longer beats.

I stalk my new neighbors, a single mother and her child, drawn by the irresistible scent of their joy and love. I crave their blood, starved for some healing respite from my ancient guilt and grief. Now to lure them into my grasp.

But they surprise me. Little Olivia accepts me without fear--talking, smiling, offering innocent affection that tugs at my long-lost humanity. Her mother, Samantha, seeks me out when she should stay away, offering sweet friendship, and tempting the forgotten man within me. They lure me instead.

Ah, Dio, Lucien, run and spare them while you can... 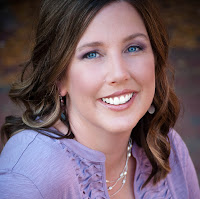 Laura is the New York Times and USA Today bestselling author of over a dozen books in contemporary and paranormal romance. Growing up, Laura’s large extended family believed in the supernatural, and family lore involving angels, ghosts, and evil-eye curses cemented in Laura a life-long fascination with storytelling and all things paranormal. She lives in Maryland with her husband, two daughters, and cute-but-bad dog, and appreciates her view of the Chesapeake Bay every day.

The bedroom door had barely clicked behind me when Samantha grabbed and shoved me toward the bed. I fell backward, and she was on top of me, clawing at my clothes and ripping off her own. Whatever had been going on with her all day was now clearly finding a release.

She kissed me roughly and shoved her tongue into my mouth. I groaned and pushed her back.

Though we french kissed all the time, I generally kept her out of my mouth.

Finally, she stilled. With her hands braced on my shoulders, her eyes burned down into mine. Her anger squeezed my chest. Her voice was strained. “Lucien, we’ll talk later. I promise. But right now I want you, and I need you. And I need you to know it, feel it.” Her words clarified little, but I nodded.

She unleashed herself on me, kissing and licking and roughly nipping at my upper body all while maintaining eye contact. I thrust my hips into her when she lingered over my Blood Mark. I finally had to grab her hair and tug her attention away from it.

With a groan, she reached a hand down between her legs and worked herself as she devoured me. When I realized what she was doing, I moaned and gripped her shoulders and rolled on top of her.

I grabbed her hand and pulled it to my mouth, then noisily sucked on her wet fingers. I groaned at the sweet nectar of her arousal.

“You see what you do to me, Lucien? What only you do to me?” she rasped. “Take me, Lucien. I’m yours,” she offered as she planted her feet flat on the mattress and pushed herself up forcefully against my erection.

Her aggression spurred mine, and I grunted. “You want me?” I asked as I ground myself against her wetness. She ran a hand over the bedspread and found the packet she’d apparently laid out earlier. She slid herself against me as she opened it and then rolled on the condom. “God, yes,” she whimpered.

I plunged forward and filled her in one hard stroke. She screamed and wrapped herself around me. Hard breaths and grunts and strained curses in two languages filled the room as we battled through Samantha’s emotions with our bodies. She kissed me roughly and dug her nails into my flesh. The physical pain mingled with her radiating pleasure to coax what I was sure was going to be one of the most intense orgasms I’d ever experienced.

She came in a frenzy of screams and muscle contractions. And then bit against the taut skin at the base of my neck. Hard.

My fangs and release shot out at the same time. I growled and in a blur turned my head in search of my biceps. I missed the tender skin of her shoulder by a hair as the urge to bite down became irresistible.

Finally, I willed my fangs to retract and licked at the wound I’d made on my arm, then slid down a little and laid my head on her heaving breasts.

“I love you,” I whispered breathlessly.

She hugged my shoulders and combed her fingers through my hair. “I love you, too.” We lay together, panting, for a long time. “Lucien?” I lifted my head off her chest to look at her. “I’m ready to talk now.”