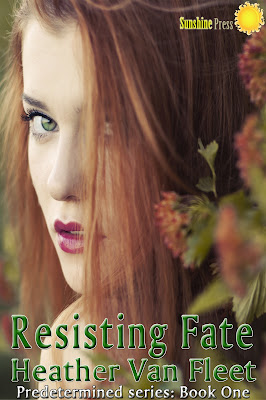 
Seventeen-year-old Emmy O’Connell is the epitome of a hot mess.

Her boyfriend’s been shipped out of town to some boarding school four states away. Her step-douche is constantly drunk and badgering her. And then there’s her good-ole-mom… The lady is nothing more than a miserable shell of a woman. She’s turned off all of her feelings and her ability to be a good mother as well, leaving poor Emmy and her four year old brother Jamie to suffer. Life couldn’t get much worse, right?

The jerk cousin of her boyfriend becomes Emmy’s worst nightmare…times ten. He’s cruel. He’s insensitive. But he also has this strange little ability over her – he makes her weak in the knees with thea single touch. No matter how miserable or amazing Jack makes her feel, Emmy can’t seem to deny him, especially when he takes on the role of her protector –her pseudo-knight in a black leather coat.

A knight who also happens to ride in on his black Harley, instead of a white horse…

Werewolves and teens shouldn’t mix! But what can Emmy do when she finds herself thrown head first into the center of it all. Can she handle the supernatural mess her life rapidly becomes or will she fight against the inevitable fate her heart desires?

“That smart mouth doesn’t sit well with me,” he licked his lips. His eyes never wavered from mine.

I nibbled on my lower lip, just as a small smile graced the edges of my mouth. Oh yeah, my bravado was about ready to kick some ass. I think I kind of liked being a smart ass.

“What are you going to do about it Jack?” I inhaled a breath, taking in his warm, delicious scent. My throat went even drier than before. I practically stared holes into his face as I studied every tiny mark, every single scar on his perfectly flawed skin. He was gorgeous, with a little scar here, a little white patch there. His hotness could have left me breathless for days if I kept up my perusal any longer.

And then I blinked, Christ. I knew exactly what had to be done. I had to kiss him. I had to get this itch scratched and then I had to move on. His eyes darkened, his breath was warm and heavy over my face, and he licked his lips. I blinked. Holy-balls… He wanted to kiss me too.

That ever-present electricity running between us wouldn’t stop. If anything, it only increased our pull. I moved in; his lips touching my lips was all I wanted. I needed to feel again, feel it all with a boy who hated me, but apparently wanted to kiss me as badly.

Dryness on dryness soon changed to warmth on warmth, and when I pressed my mouth fully to his, his hands left my neck, and went to my waist. His fingernails dug into my sides and the son of a bitch pushed me away from him.

So there I was, my head tilted to the side, ready, willing, and able to do whatever the hell this moment led us too, and all he could do was chuckle. Yes. Chuckle. He was the biggest rat bastard.

Heather Van Fleet currently resides in northern Illinois, with her three little ladies, Kelsey, Emma, and Isabella, and her fabulous hubby (and high school sweetheart) Chris, with whom she’s been blissfully married to now for ten years. She’s a stay at home mom by day, and an avid and completely obsessive writer and reader by night.

Heather always had a soft spot in her heart for books, and she’s been creating her own little stories since she was a seven year old. But she never really had the confidence or the time to actually sit down and really do something about it, until her youngest daughter was born just two years ago.

Resisting Fate, book one in her Predetermined series, is her young adult, paranormal baby! It’s packed full of wolves…witches…and one sassy little red-headed teenage girl! She had an absolute blast writing it, and can’t wait to share it with the world!

Email ThisBlogThis!Share to TwitterShare to FacebookShare to Pinterest
Labels: PNR, Release Blitz, YA, YA Paranormal Romance, YA PNR