After numbing pain for the past five years with boys, alcohol, and all-around apathy, she finds herself on a Greyhound bus to nowhere Montana the summer after she graduates high school. Her mom agreed to front the bill to Rowen’s dream art school only if Rowen proves she can work hard and stay out of trouble at Willow Springs Ranch. Cooking breakfast at the crack of dawn for a couple dozen ranch hands and mucking out horse stalls are the last things in the world Rowen wants to spend her summer doing.

Until Jesse Walker saunters into her life wearing a pair of painted-on jeans, a cowboy hat, and a grin that makes something in her chest she’d thought was frozen go boom-boom. Jesse’s like no one else, and certainly nothing like her. He’s the bright and shiny to her dark and jaded.

Rowen knows there’s no happily-ever-after for the golden boy and the rebel girl—happily-right-now is a stretch—so she tries to forget and ignore the boy who makes her feel things she’s not sure she’s ready to feel. But the more she pushes him away, the closer he seems to get. The more she convinces herself she doesn’t care, the harder she falls.

When her dark secrets refuse to stay locked behind the walls she’s kept up for years, Rowen realizes it’s not just everyone else she needs to be honest with. It’s herself. 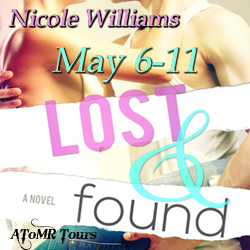 Click the above tour banner to go to the full tour schedule!

Nicole loves hearing from her readers. You can contact her at nwilliamsbooks@gmail.com.

I have a new Beloved! I am happy to add Lost & Found into that list! It honestly blew me away.

I began reading my ARC copy around 9 pm & could NOT put it down. I literally read all night & finished it around 3 that morning. Of course I had work the next morning... Can you say Zombie?!

It was well worth it!

The characters in Lost & Found are absolutely precious. Rowen (I <3 her name) comes into the novel as a sad, 'rebellious' type character. She has her own style that she's taken on for reasons in the beginning you don't quite understand. You can tell that something has happened to Rowen to make her act as cold and disconnected as she does... but you just don't know what. I immediately liked her and wanted to know more about her. As you begin to unfold the puzzle that is Rowen, you love her even more. You start to see that she's had a very rough past, gone through something that someone her age should never go through, and has a crappy mother to top it all off.

Rowen is forced to go spend the entire summer at Willow Springs Ranch or suffer the consequence of not being able to go to her art school of choice for college. Her mother refuses to pay for it unless she 'proves' herself over the summer.

As Rowen's character unfolds, you begin to see that it isn't Rowen with the problem. Her mother is the problem. She looks at Rowen with constant disdain... her hair is crap, her clothes are crap, her makeup is crap... The list goes on. I wanted to jump through the novel & totally slap her mother. >_<

Rowen gets off the bus & is picked up by our novel's resident hottie extraordinaire!

Ohh Jesse.... I've never really cared for a pair of tight wranglers on a man's booty before... but Jesse... I would make an exception for him. Ha. ^_^

Jesse has a quirky personality that you automatically are drawn to. You want him to be on every page because he's just that precious. You begin to see Rowen's mood brighten & you see that once she's out of her previous surroundings with her mom, she's a deeply hurt but loving individual. I adored the time that Rowen spent interacting with Jesse's sisters. Jesse's mother Rose is adorable. She's the perfect, supportive, loving mother who cares about her babies. She gives good advice and pays attention.

Jesse, aka resident hottie extraordinaire, has a past of his own that you begin to learn more about. It breaks your heart and makes you close the circle on why he is the way he is. He could've gone a different direction with his life, but he chose the positive road.

There's so many other supporting characters that you begin to meet. I adored each of them. Even the "bad" guy Garth has an appealing nature - even though he's a total jerk, you want to know WHY he acts like that. Nicole has a great way of creating characters with depth & background. Love it!

Overall, this novel kept me on my toes. Yes, there are predictable moments. There's not a single romance type novel out there today that doesn't. However, the twists that start to occur keep you guessing and wanting to know more. That's pretty much the reason why I couldn't put this novel down. Ha.


I can't wait to see what Nicole does next!

Use the Rafflecopter below to enter the tour wide giveaway!