Guys & Gals! Gals & Guys! Today, I'm super excited to say that Amy Noelle is joining us! Amy's debut novel, Code Red, is one I'm excited to dig in to! EEeek!
First off, let me tell you guys a little bit about Amy & her debut novel!
Then I'm turning the floor over to her! :) 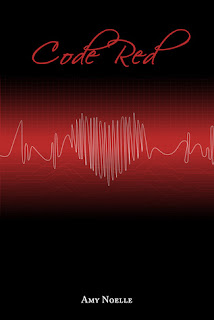 
After getting hurt in college by a gorgeous man, Nicole Magette vowed never to risk losing her heart again. Now she lives a structured and satisfying life. Her work is easy, her friends are her family, and the only consistent men in her life are her two cats, Winchester and Huntington Peabody the Third. She doesn't date, and she hooks up only with losers—men she has absolutely no risk of falling for. But if she finds herself in danger, she has her old fail-safe in place—the Code Red.

In college, she and her four best friends came up with the system as a way to keep away the good-looking bastards that might worm their way past their carefully constructed walls. Seven years later, three of her friends have succumbed to their last Code Reds and are happily married. Now it’s just Nicole and her closest friend, Jen, who are still on their own, and Nic is just fine with that.

That is, until Joshua Daniels is transferred to Nicole’s office from New York and assigned to work with her on a special project. He's everything she's avoided and everything she claims she doesn't want, so why can’t she get him out of her mind? He's persistent, dangerously handsome, and sexy as sin. In other words, he’s her worst nightmare. She turns to her friends to help her resist Josh’s considerable charms and the inescapable draw she feels every time she gets near him. Can the Code Red save her this time, or will Josh send her perfectly balanced life into chaos?

About the Author:
Amy Noelle is a thirty-something single woman with two cats, Lily and Logan. Though she contends that she is not a crazy cat lady, she freely admits to being a crazy football fan. You can find her glued to the couch every fall weekend, cheering on her Seminoles and Buccaneers. After attending Florida State University for two years, she transferred to Northern Illinois University and graduated in 1997 with degrees in Journalism and Political Science. She was born in the Azores Islands, Portugal, and lived as a military brat from the west coast to the east coast of the United States, though she's found her permanent home in Tampa, Florida, for the last decade. Besides football and writing, her other loves are television, movies, the beach, thunderstorms, and her family and friends.


I encourage you guys to go and connect with Amy! You can find her in all of these places:
TWCS    Blog    Facebook    Goodreads

Now, as promised, I'm turning the floor over to Amy to talk about whatever is on her mind! :)
Thanks for stopping by Amy!! Happy to have you!!!!


You’re giving wordy me free rein to talk about whatever I want? You are a far braver soul than I could ever be! I kid. Actually it’s very cool of you to just let me talk about whatever is in this very strange head of mine in regards to my book, writing, publishing, etc. I’ll just do what I usually do and write and see what happens. Hopefully it’ll make some semblance of sense!

I’ve been asked in the past how I go about writing and the truth is I don’t do anything special. I just sit in front of the laptop and let the words flow out. I get an idea and I might jot down a few things on a notebook that are important, such as a character’s name or physical description, and I go to town. I usually have a set beginning to a story and know the ending and some of the major events in between, but I don’t outline and I don’t make my characters conform to whatever my initial vision is. I let them go and I go along with them. Thankfully we all do seem to manage to end up in the same place that I hoped to go in the end, but sometimes there are unexpected additions along the way there. I think this makes it fun for me because I’m almost like a reader of the story at the same time that I’m writing it, if that makes sense.

I was telling someone just the other day that I wished I could write a murder mystery type of novel, as those are what I read more than anything these days. I love the In Death series by JD Robb, Cornwell’s Scarpetta novels and Iris Johansen’s stories, along with way more than I could begin to name now. My friend told me I should go ahead and do it and I had to tell her that it wouldn’t be possible for me. Or it might be, if I completely changed how I write. Having to plot out and execute a crime, written wise anyway, and leave the little clues and hints along the way would require an outline and then some! And knowing me, I’d probably go off on tangent and have someone else turn out to be the killer than I planned in the first place. No, I can’t write a murder mystery but I definitely admire those who can!

What works for one author definitely doesn’t work for another. That’s something you learn pretty darn quickly when you put your words out there, along with the old adage that you can’t please everyone so you’ve got to please yourself. I write for me, first and foremost. I think that starting out in the fanfiction world has helped me prepare for the criticism that will come for Code Red and my other future works. Instant feedback can definitely be gratifying. That doesn’t make me any less nervous when a new review of my book or my fic comes my way.

Of course, I have to fight my urge to respond to book reviewers as that seems to get a lot of authors in trouble. I get it. You can’t help but want to defend characters that came from you, but I know it only leads to bad things. So I think I’ll take a minute to thank anyone that has read and reviewed my book, or will do so, whether they like it or they don’t. It’s awesome that you’ve taken the time to read and I hope that I gave you a laugh or two.

You mentioned playlists and I so wish I had one for Code Red or anything else that I’ve written but I don’t often think in terms of music and I don’t listen to music when I write, because I’ll want to sing along and get lost in the song rather than in the words. I always have the TV on when I’m writing because I need noise but I’m able to tune that out more easily than a radio. Maybe I can issue that challenge to my readers. What songs make you think of the story, of Nic or Josh or both together? I had that Katy Perry “Wide Awake” song in mind when Nic was in that bad space thinking the worst of their future, but that was just her being overdramatic and silly, as she tends to do in certain moments.

I’ve been asked a few times if Nicole is someone I know or if her friends are, which is a question that I truly love to address. The truth is, my characters have bits and pieces of me in them, along with bits and pieces of people I know or have run across, but they’re all themselves as well. It’s a lot easier to write what you know and love, so giving the characters some of my characteristics or likes does tend to happen. I have two cats, like Nic, although mine aren’t nearly as stuck up as Hunt is, or as loving as Win is. Maybe there’s some wish fulfillment going on there! I do watch Supernatural, although unlike Nic, my obsession with the show has waned in the past few years. I am a Cardinals baseball fan as well. But that’s it as far as my similarities with her, I think. Well, I can be sarcastic, too, so there’s that!

Nic’s group of friends is not my group of friends, sadly. I wish I had that tight night little group of people that knew me inside and out, but moving and marriage and kids and all that has kind of diminished relationships. But, new ones form and life is pretty good right now so I have no complaints. But I did love writing those girls and if anyone out there wants to be that type of friend for me, give me a call.

I actually just finished writing novel number two, or my first draft of it anyway. I’m putting it aside for a little bit to return to some fanfiction and of course promotion for Code Red, but I’m pretty excited about it. It combines baseball and romance so that’s fun for me. Hopefully we can talk about that one next year!

Well, I think I’ve probably yammered on long enough at this point. I could ramble some more but this seems like a good point to wrap it up and thank you for hosting me on your blog. I appreciate you doing so more than I can say. Thank you and I hope you and your readers enjoy Code Red. 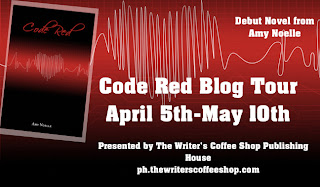