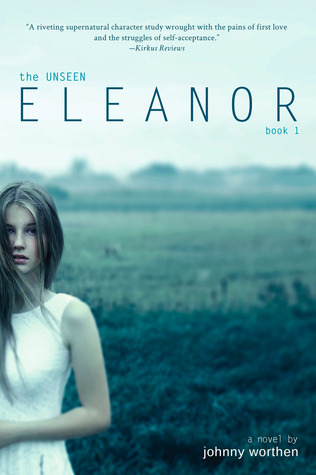 It was a gamble for Eleanor to rejoin humanity, but she was driven to it. She’d been too successful forgetting. The last vestiges of her family hung by a thread in her transformed brain and drove her to be reckless. Ten years later, Eleanor hides in plain sight. She is an average girl getting average grades in a small Wyoming town: poor but happy, lonely but loved. Her mother, Tabitha, is there for her and that’s all she’s ever needed. But now her mother is sick and David has returned. The only friend she’d ever had, the only other person who knows her secret, is back. And Eleanor again becomes reckless.

Eleanor is a modest girl, unremarkable but extraordinary, young but old, malleable but fixed. She is scared and confused. She is a liar and a thief. Eleanor is not what she appears to be.

JOHNNY WORTHEN grew up in the high desert snows and warm summer winds of the Wasatch Mountains. He graduated with a B.A. in English, minor in Classics and a Master's in American Studies from the University of Utah. After a series of businesses and adventures, including years abroad and running his own bakery, Johnny found himself drawn to the only thing he ever wanted to do -- write. And write he does. Well versed in modern literary criticism and cultural studies, Johnny writes upmarket multi-genre fiction – thriller, horror, young adult, comedy and mystery so far. “I write what I like to read,” he says. “That guarantees me at least one fan and a hectic job for my publicist.”

When not pounding on his keyboard, attending conferences and conventions, Johnny Worthen can be found with his wife and two boys in Sandy, Utah.

In praise of the Reader

Sometimes I think of myself as a candle-maker in the age of the LED. I am a writer. I am an author. I create books. Paper objects which share my thoughts in antiquated symbols thousands of years old. The product I make requires knowledge and education to access, it requires an active participation by the reader as the fuel for the machine is found in their imagination. I requires the reader’s time and indulgence. It is not instant gratification. In the age of TV and movies, video games and the internet, reading for pleasure is a rare activity. It is difficult to compete with the technological leaps entertainment has seen in the last half century, hypnotic lights and phrenetic cut scenes. It is difficult but not impossible.

Books offer several advantages over every other narrative art forms. Here are three that I like to remember

First, books are one heck of a great bargain. For the cost of a movie ticket you can get days of entertainment.

Second, books flow at a reader’s pace. They can read it all at once, speed-read style, get to the action, whoop-whoop the case is solved, or they can linger in the language, a warm bath of images and symbols to play with.

Third, the level of complexity offered in a book cannot be duplicated even by most skillful filmmaker. Films speak in images, plays in speech, but books speak in thoughts. Literature can reach deep into the reader like a subliminal lullaby, touching the rawest of emotions. Other narrative forms can do this too, but books, requiring the reader’s cooperation, I would argue, are the most powerful and effective at this. No monster ever shown on a screen is half as terrifying as the one an author induces you to imagine. No love was ever so pure as the one you the reader is lead to create.

Study after study, college after college and life after life all agree that people who read are more educated and worldly and interesting than people who don’t. I had a friend once tell me that the best experiences they’d ever had in their life never actually happened to them. That’s the power of books. That’s why it is so important to read and teach our children to read.

I’m here to tell you about my new book, ELEANOR, THE UNSEEN, a young adult paranormal story about a girl living in a small Wyoming town. She is old and young, malleable but fixed. She is loved and alone. She is a liar and a thief and she is not what she appears to be.

The book’s getting great reviews and is a fantastic fable of growing up, the trials of the outsider and dealing with prejudice. It’s full of grand themes intimately argued, personal triumph and tragedy. You’d do me a favor if you were to look it up and let me know what you think of it, but if you don’t that’s okay too, as long as you, gentle reader, read something and encourage others to do the same.

I am a candlemaker but it is you, the readers, who keep the flame alight. It is that light that ignites our culture. The best movies are born of the best books. The stories drawn on paper sheets in ancient symbols that require an effort to understand. Books are the seeds of culture, the narratives of our society — extra lives waiting to be shared for the cost a cup of coffee.

If you’re here at Kayla’s Place, I know you’re a reader and I want to thank you. On behalf of authors everywhere, on behalf of our culture and society and species, I thank you! When we meet we’ll have much to discuss, depths of intrigue and twists of fate, experiences beyond ourselves but still our own, all this because we have read it in books.

Read and be well and look for ELEANOR, THE UNSEEN, wherever excellent books are sold.