Aahhh! I cannot wait for this one! <3 this series! It's been one of my absolutely faves since first picking up book 1! Without further ado, here's the cover for Undeniably Chosen by Shelly Crane! 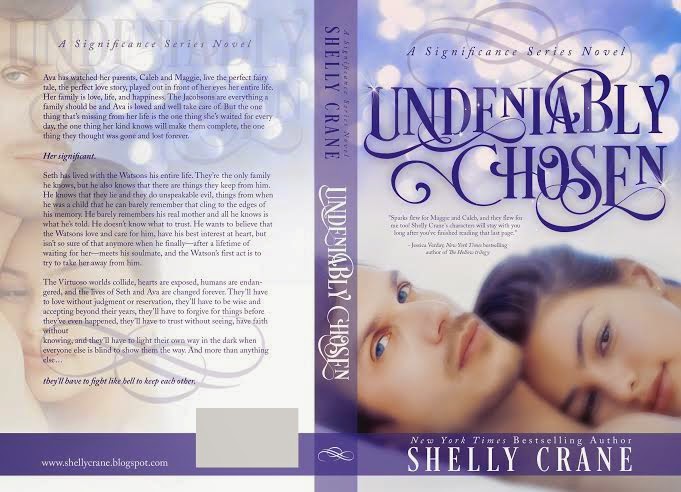 Ava has watched her parents, Caleb and Maggie, live the perfect fairy tale, the perfect love story, played out in front of her eyes her entire life. Her family is love, life, and happiness. The Jacobsons are everything a family should be and Ava is loved and well taken care of. But the one thing that’s missing from her life is the one thing she’s waited for every day, the one thing her kind knows will make them complete, the one thing they thought was gone and lost forever.

Seth has lived with the Watsons his entire life. They’re the only family he knows, but he knows that there are things they keep from him. He knows that they lie and they do unspeakable evil, things from when he was a child that he can barely remember that cling to the edges of his memory. He barely remembers his real mother and all he knows is what he’s told. He doesn’t know what to trust. He wants to believe that the Watsons love and care for him, have his best interest at heart, but isn’t so sure of that anymore when he finally—after a lifetime of waiting for her—meets his soulmate, and the Watson’s first act is to try to take her away from him.

The Virtuoso worlds collide, hearts are exposed, humans are endangered, and the lives of Seth and Ava are changed forever. They’ll have to love without judgment or reservation, they’ll have to be wise and accepting beyond their years, they’ll have to forgive for things before they’ve even happened, they’ll have to trust without seeing, have faith without knowing, and they’ll have to light their own way in the dark when everyone else is blind to show them the way. And more than anything else… 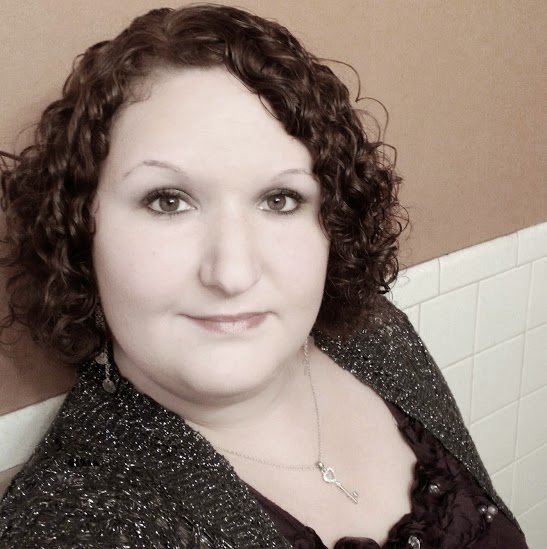 Shelly is a NEW YORK TIMES & USA TODAY bestselling YA author from a small town in Georgia and loves everything about the south. She is wife to a fantastical husband and stay at home mom to two boisterous and mischievous boys who keep her on her toes. She loves paperbacks, coffee, and candy corn, and to spend time with her family and friends, go out to eat at new restaurants and site see in the new areas they travel to, listen to music and also LOVES to read.

Her own books happen by accident and she revels in the writing and imagination process. She doesn't go anywhere without her notepad for fear of an idea creeping up and not being able to write it down immediately, even in the middle of the night, where her best ideas are born.

“I don’t know if I can even sleep tonight,” I muttered and rubbed at my arms. They were restless. “I can already feel myself twitching.”
“Tomorrow…” Dad began, but stopped. He sighed forcefully and tightened his fists. “I’ll go find him and make him come here if he doesn’t come on his own.”
“Dad, you didn’t see him. He was…” I bit into my lip hard. Just talking about him was making me ache all over. I closed my eyes and tried to breathe.
I heard Mom say, “Baby, I think we need to stop talking about this. It’s just making things worse for her.”
“I know, but…maybe I should go over there. Maybe I should try to find him and—you know what? No.” I looked up to find him looking down at me. “I’m not going to do that. It has to be his choice until it’s not. I’ll give him until tomorrow to be the good guy. If he doesn’t, then I’ll go get him and make him. I can tell by looking at you that you want to have faith in him.”
“You didn’t see him, Dad,” I reiterated. “He wanted this. He was worried about me. He’ll come. He’ll find me.” I hoped. “If what you said is true, then he didn’t choose any of what happened. He’s not a Watson.”
“But he’s lived with them his whole life,” Mom reasoned. “We have no idea the things they’ve done to him, the things they’ve made him do. We have to be cautious. You have to cautious.” She went into the kitchen and I heard a pill bottle shake before she came back. “Here. Take these. They’ll help you sleep tonight. They were Grans,” she said softly.
I ached as the pills went down. I heard Rodney coming in the back door loudly. Dad went right to him and put his hand on his chest to stop him. They whispered back and forth and Rodney looked at me over Dad’s shoulder. Dad wasn’t going to be able to stop him. He didn’t know that, but I did.
“Come on, Dad,” Rodney said gruffly and looked at him right in his face. “Move.”
He pushed his Champion gently in the shoulder and I watched Dad’s stunned face as he watched Rodney come and sweep we up in his big brotherly arms on the couch. He said low in my ear, but I knew that they still could hear, “Tell me who I have to hurt. Who is this guy and why isn’t he here with you right now?”
I looked at Dad and he looked so amused and bemused all at once. He waved me on and leaned his hip against the counter, pulling Mom into the ‘v’ of his legs so he could wrap his arms around her from behind. I heard her so sigh loud and hated that I was causing them so much distress.
“Seth,” I explained. “Seth Watson,” I said with as much gumption as I could muster.
His eyes rounded. I told him everything and he tightened his arms on me as he listened.
“Okay,” he said and kicked his shoes off the end of the couch. Mom was two seconds from scolding him when he asked, “So where is he? He should be here.”
Like fate usually worked, there was a knock on the front door. An insistent knock. Dad shot me a look before taking a loaded breath. I started to shake and stood from the couch quickly. It was him; I knew it like I knew my own name.
“Ava, wait,” he told me.
“Dad.”
“You, sit,” he said in his Champion voice. “I’ll answer and let him in. What if the Watsons were planning something and knew you’d run to the door to answer it thinking it was him? We know nothing about him yet. Until we do, we go at this with caution.” I sighed. I hated that I had to look at my significant with anything but reverence, but Daddy was right. I mean, I was the one that had run right out of the coffee shop this afternoon. “I mean it, baby girl,” he said softly.
Rodney turned me to look at him and held my upper arms in his hands. “If he hurts you, I can’t be held account for what I do.”
“I love you, you know that?” I replied and kissed his cheek. I tried to smile, but think I failed epically when he put one arm around my shoulders and tugged me close, as if to shield me from whatever or whoever was coming.
Dad had to know I was anxious—he didn’t make me wait. He went to the door quickly. I could hear them in the other room with deep, urgent tones. My significant.
And then there he was.