Giveaway, Review & Guest Post: Confessions of the Very First Zombie Slayer (That I Know Of) by @FJR_Titchenell 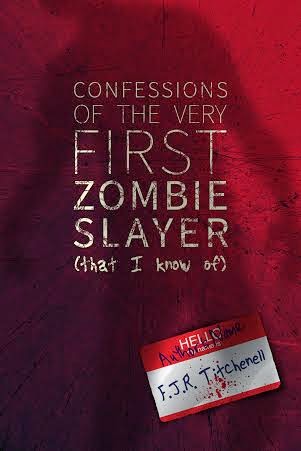 Confessions of the Very First Zombie Slayer (that I know of)
by F.J.R. Trichenell
Debut YA Horror/Comedy
Published May 6 by Jolly Fish Press


The world is Cassie Fremont’s playground. Her face is on the cover of every newspaper, she has no homework, no curfew, and no credit limit, and she spends her days traveling the country with her friends, including a boy who would flirt with death just to turn her head. Life is just about perfect—except that those newspaper headlines are about her bludgeoning her crush to death with a paintball gun, she has to fight ravenous walking corpses every time she steps outside, and one of her friends is still missing, trapped somewhere in the distant, practically impassable wreckage of Manhattan. Still, Cassie’s an optimist. More prone to hysterical laughter than hysterical tears, she’d rather fight a corpse than be one, and she won’t leave a friend stranded when she can simply take her road trip to impossible new places to find her, even if getting there means admitting to that boy that she might just love him, too. Skillfully blending effective horror with unexpected humor, this diary-format novel is a fast-paced and heartwarming read.


Grab Your Copy from Amazon

F.J.R. Titchenell is an author of Young Adult Sci-Fi and Horror fiction. She is represented by Jennifer Mishler of Literary Counsel and currently lives in San Gabriel, California with her husband and fellow author, Matt Carter, and their pet king snake, Mica.

The "F" is for Fiona, and on the rare occasions when she can be pried away from her keyboard, her kindle, and the pages of her latest favorite book, Fi can usually be found over-analyzing the inner workings of various TV Sci-Fi universes or testing out some intriguing new recipe, usually chocolate-related.

Confessions of the Very First Zombie Slayer (That I Know of) is F.J.R. Titchenell’s first novel. Her first novel coauthored with Matt Carter, Splinters, will be available fall of 2014.

1: World War Z (book)
This is the ultimate zombie novel. The thought and research that must have gone into it is staggering, and far beyond anything I can imagine attempting. How is that an influence, then? Because it took me deeper into a zombie apocalyptic world than anything else and started my brain really working there.

2: Zombieland
It's a zombie comedy road trip. I think that influence is pretty clear. I wanted to give YA readers the kind of zombie fun this movie offers a primarily adult male audience.

3: Shaun of the Dead
This was the first zombie movie I ever saw, and consequently the first zombie comedy I saw. I have no doubt that mixing zombies with British romantic comedy did a lot to endear them to me.

4: The Walking Dead (TV)
I became a fan of this one too late for it to have much of an influence on me as I was writing Confessions of the Very First Zombie Slayer (That I Know of), but with it being the main work of zombie fiction everyone knows right now, you can't help it influencing how you think about zombies, and every other zombie story must be compared and contrasted with, no exceptions.

5: The Walking Dead (Comics)
For similar reasons to the TV show, the comparison must be made, even though I didn't read them until after writing the book. I'm not as big a fan of the comics as the TV show. They have great moments but tend to devolve into characters having endlessly circular conversations and monologues about how awful their world is and how awful it makes them. That was something I always wanted to avoid overdoing.

6: 28 Days Later/28 Weeks Later
Another of my earliest introductions to zombies, and yes, for all storytelling purposes, that is what the monsters of the 28 series are. They’re my favorite serious take on fast zombies. I'm not an adamant member of either the fast or slow zombie camp. I enjoy them both in different ways, and the speedwalk-shambling zombies of Confessions of the Very First Zombie Slayer (That I Know of) are my compromise.

7: Warm Bodies
I hadn't read Warm Bodies when I wrote Confessions of the Very First Zombie Slayer (That I Know of) either, and even if I had, they wouldn't have much in common. I don’t romanticize zombies, but Warm Bodies is the one work I truly love that does. It made me accept that sentient zombies can be done well, so even though that's not what I do, that has to count as an influence on how I now look at zombies.

8: Night of the Living Dead
Once I knew I loved zombies, I had to watch the classic. Plenty of the zombie storytelling elements that Night of the Living Dead established show up in Confessions of the Very First Zombie Slayer (That I Know of), like the old, slow-acting bites that always scared me most. You'll never meet any Barbaras in my books though. She’s just… just awful.

9: Return of the Living Dead
These zombies are capable of thought and speech and are completely unbeatable. My zombies are far more traditional in nature, but I adore the balance of humor and creepiness this movie achieves.

10: The Forest of Hands and Teeth
I wanted to love this book so much. It's the first book in a YA zombie epic! How could that not be exactly my thing? As you can probably guess, I didn't like it, and it ended up being a strong anti-influence on me. It's not that I don't like dark and/or heavy stuff in conjunction with either YA or zombies. I do. But this one relies so heavily on the awfulness of its dystopian post-apocalyptic world to make the story that the characters get no part in that. Their qualities and relationships are announced rather than developed organically. As much as I liked the ideas in the abstract, I think it's that disappointing disconnect I felt from those characters that made me want to do everything Forest of Hands and Teeth and its following imitators didn't; get close with these teens stuck at the end of the world, explore their relationships and let the fun of zombie slaying in.

Phew... zombie apocalypse! Although the author jumps right into this tale and we don't really end up with a lot of background on why everything has gone bonkers, I felt like the novel started off with a bang. I usually don't read many zombie novels. I've just never gotten into the whole being dead thing... LOL However, if all zombie books cracked me up like this one, I'd totally start reading them all.

The characters were great. I'll admit I wish there was alittle more "meat" to the characters sometimes. I felt like, rarely, they felt a little flat but not to the point where I disliked them. Hearing the tale through Cassie's narration was fun. I have to admit, it took me a while to get used to the format - it's sort of like reading a journal that someone has kept. I liked it once I got the feel for it & settled in. I adored the quirky humor throughout the novel which mixed well with all the gory battle &, well, apocalyptic times...

The action sequences were totally awesome & kept me glued to the pages. The novel is very fast paced & action packed. I snorted a few times in between griping my ereader in a death grip through the fight sequences. Awesome job on the author's part.

The plot flowed well for me. I enjoyed it. Although, I thought it was a little crazy that she went through all the effort to save her friend when they didn't really seem friends anymore.. but whatever. It worked. I did think the ending felt a little rushed but it wasn't a buzzkill. Like I said before, the novel was really fast paced so it worked.

Overall Rating: 4 Stars
Cover Rating: 3 Stars
Characters: 3.5 Stars
Plot: 4 Stars
Climax: There were so many action packed moments that I'm not quite sure where I could pin point an actual climax...
Ending: 3.5 Stars

Use the rafflecopter below to enter the tour wide giveaway hosted by the tour organizer. Good luck everyone!