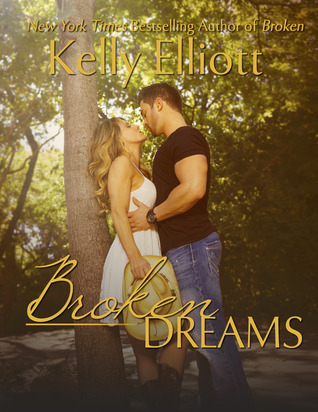 Courtney Will always dreamed of finding her Prince Charming and living happily ever after, like in the fairy tales she read as a child. Her dreams were shattered one fateful night when her prince turned out to be her worst nightmare. Burying herself in her job as an editor, Courtney tried to forget her past, and she lost hope of ever finding true love.

Reed Moore’s past filled his world with guilt and anger, and then a mistake in college deepened these feelings. Fearing he will one day repeat his father’s mistakes with the woman he loves, Reed has vowed to never give his heart to anyone.

Reed and Courtney have each spent years building walls to guard their hearts, so when their feelings for one another explode into something unexpected, they argue and throw hurtful words at each other in hopes of avoiding the truth.

Will Reed end up being the Prince Charming Courtney has dreamed of her entire life? Is Courtney the woman who will help Reed move past the guilt and anger, so he can embrace love?
Can their broken dreams become their happily ever after? 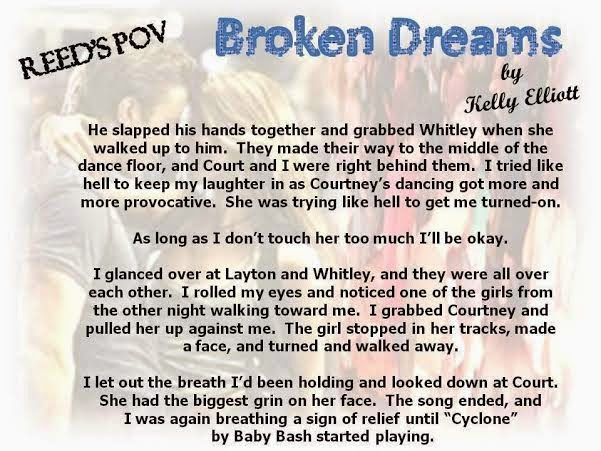 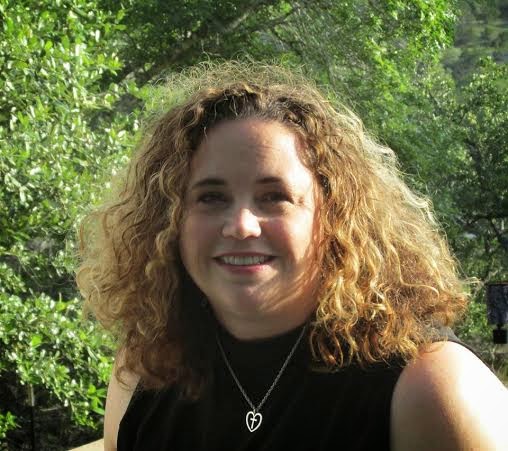 Who is Kelly Elliott?

Really I'm just a wife to a wonderful Texas cowboy who has a nack for making me laugh almost daily and supports my crazy ideas and dreams for some unknown reason...he claims it's because he loves me.....so I'll just go with that one!

Oh...and I like to sit down and write in my spare time!

I live in the Texas hill country and one of my favorite things to do is go for hikes around our property with my second favorite man, Gus....my chocolate lab and my sweet girl Rose, our golden retriever. When I'm not outside helping the hubby haul brush or move rocks or whatever fun chore he has in store for me that day, you will find me inside reading, writing or watching HGTV and soaking in a nice hot bubble bath.....yeah that last one I just made up but it sure does sound nice!!

Use the Rafflecopter below to enter the tour wide giveaway! Good Luck Everyone!

Just then, Reed came flying out the back door. “Motherfucking son of a bitch. I’m going to kill him!” he yelled as he made his way to the ranch truck.
I jumped up and wiped the tears away. “Whit, did Layton tell Reed?” I asked as I saw Reed picking up the pace when he started jogging to the ranch truck. I took off after him.
“Um…”
“Whit!”
“Okay, well, he called Reed and told him to go fire Mitch,” Whitley said in a panicked voice.
“What? Oh my God! Okay…well, listen, sweetheart, everything will be fine here! Enjoy your honeymoon.”
“Wait! What? You can’t just end a call like that, Courtney.”
After running and catching up, I stood in front of the ranch truck. “Yeah, I can. I’ve got to go. Reed seems really pissed.”
I hung up the phone and ran around to the passenger side of the truck. I jumped in, and Reed hit the gas, throwing me back into the seat.
“Jesus, Reed. Where in the hell are you going?” I asked as I desperately tried to get the seat belt on.
I glanced at Reed while he was mumbling something about killing Mitch for hurting me.
“Uh…Reed, can you put on your seat belt?” I asked.
He snapped his head over to me. “What?” He shook his head and pushed down on the gas.
I sat back and closed my eyes. Shit, shit, shit! I shouldn’t have said anything. How stupid of me to think that Layton wouldn’t tell Reed.
Layton had been looking for an excuse to get rid of Mitch ever since he found out that Mitch had been in contact with Layton’s father all those years and never told him.
By the time we pulled up to Mitch’s place, my heart was beating a mile a minute. There was a Nissan parked next to Mitch’s truck.
That must be her car.
“Fucking son of a bitch,” Reed said.
I grabbed his arm. “Reed, please don’t do this.”
He turned to look at me, and his eyes were filled with tears. I sucked in a breath of air and let go of his arm.
“He hurt you, Courtney. I really wish you had told me last night. Now, stay in the truck, Court.”
He jumped out and took off. Before he made it onto the porch, Mitch came out.
“Oh shit,” I whispered.
Mitch smiled at Reed and then looked at me in the truck. “You get what you wished for last night?” Mitch asked.
Wait, what in the hell does he mean by that?
“You motherfucker,” Reed said as he walked up to Mitch and punched the hell out of him.
I screamed and jumped out of the truck. By the time I made it to the porch, Reed was on top of Mitch, beating the shit out of him. Karen came running out, yelling for Reed to stop. She came to a halt when she saw me. She put her hand up to her mouth and then looked back at Reed on top of Mitch. I couldn’t move. A part of me wanted Reed to beat the hell out of Mitch, and the other part wanted him to stop.