Verbally abused by her mother for years, 18 year old Ellie Johnson always believed she would never be loved or wanted by anyone. She focused all her attention on her grades and getting into UT to start a new life away from her mother.

The last thing Ellie expected was to fall in love with Gunner Mathews, a starting linebacker for UT football team and not to mention, her brothers best friend.

Gunner only had two passions in life, football and his grandfather's ranch, until he falls for his best friends little sister. He will stop at nothing to show Ellie how much he wants her, even if it means he has to move faster than she would like.

Gunner knows they are meant to be together forever, but Ellie keeps denying her feelings out of fear of being hurt. Every time he gets close to winning her love, something pushes her away. Will Ellie ever be able to let go of the past?

About the Author (per her Blog):

"Really I'm just a wife to a wonderful Texas cowboy who has a nack for making me laugh almost daily and supports my crazy ideas and dreams for some unknown reason...he claims it's because he loves me.....so I'll just go with that one!

Oh...and I like to sit down and write in my spare time!"

My gosh! I read Wanted a while back and have no idea why it's taken me this long to post my review! >_< I read it in 2 sittings so maybe that had something to do with it. I started it and finished it quickly so it slipped my mind. LoL

I adored the characters in Wanted. Ellie's struggle to overcome the verbal abuse that her mother put her under for years is gut-wrenching. I mean, put yourself in her shoes. You're told over and over again growing up that no one will ever want you. This happens all over the world, every day. It's heart breaking and I think the parents deserve a serious ass kicking because of it. Sorry - soap box... LoL

I loved that Jeff was such an amazing big brother. I'd hate to think of where Ellie would've been had it not been for having a big brother like Jeff. Gunner - swoon - he's the gentlemanly character that every girl should want. I adored Gunner's relationship with his grandparents. I think that was my favorite part of the entire novel.

Not only is Ellie struggling with just the words stuck on replay in her head thanks to her crappy mom, she also has to deal with contantly being cheated on by crappy boyfriends. Those jerks just reinforce what her mom planted in her head. My heart broke for her over and over again because it was like she couldn't get a break. The more that happened, the more she believed that her mom was right - no one would ever want her. She's never be truly wanted.

Yes, there are moments that are predictable - few romance novels can truly say that they don't contain such moments. If you enjoy sweet romances with a few mountains that have to be climbed, then this is it.

The only aspect of the entire novel that kinda left me saying "eh.." were several spots that the editing could've been better. A few patches were pretty rough. Overall, for me, it wasn't a deal breaker but I did want to take a red pen out a handful of times.

I do want to warn readers that there's a lot of cussing. I don't complain because I cuss like a sailor but a lot of readers don't like to read it. So if swearing, a lot, is a deal breaker for you, you might not want to pick this one up.

It was a nice, quick read for me. Yes, there are emotional ups and downs in the story, but it flows well and I was glued to the pages.

I can't wait to start Saved! Kelly Elliott is definitely an author I've been following since reading Wanted. Since I read the novel several weeks ago, I have been following Kelly and keeping up with her. Guys, she's so much fun. Her obsession with Gary Taylor *sigh* definitely benefits those that follow her FB page :) If you don't know who Gary Taylor is, go look him up. He's Kelly's inspiration for Gunner.


Giveaway Time!
Kelly was awesome enough to send me over some SIGNED Wanted Postcards to giveaway!! You know you want one!!! :) 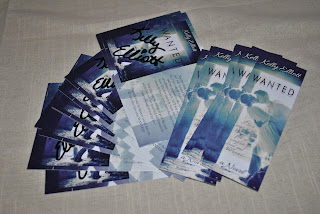 So Here's what I'm gonna do:
Use the rafflecopter below to enter for your chance to be one of 4 lucky people!
Yes, I'll have 4 winners!
Each of you will receive a signed Postcard plus a bookmark that you can share
(or tuck away in your copy of Wanted) ^_^
***Yes, this is an international giveaway***