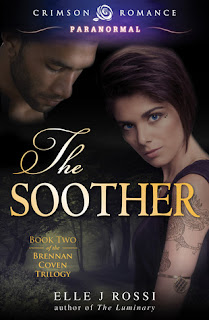 A WITCH WITH THE GIFT OF LIGHT

Calliope the Soother is a witch devoting her life to easing the pain and misery of others, drawing out the darkness and replacing it with light.

A HALF-BREED WITH THE CURSE OF DARKNESS

A powerful wizard by birthright, Krystoff Dubhar’s tainted blood carries shadows destined to possess his mind and soul. Only with outlawed, dangerous blood magick can he hold the shadows at bay.

HIS SHADOWS WEAKEN HER

In the shadowed realm of Mistropa, Krystoff falls to overwhelming odds. Just as the Queen of Shadows is about to claim his power—and his life, Calliope hears the foreboding cry of the banshee, and the Soother becomes the wizard’s savior. As Calliope heals her mysterious fanged enemy, her heart is sent into overdrive. Is her accelerated pulse prompted by fear or desire? Either way, Krystoff's shadowed presence proves dangerous. His sensual words ignite a fire long held dormant. His kiss reveals a forbidden passion.

HIS HUNGER MAY VERY WELL KILL HER

Seeking vengeance, the Queen’s dark army turns the Soother’s village into a battleground rife with death and destruction. Calliope fights to save her coven. Krystoff fights to save the Soother who has captured his heart. One bite changes everything. Can love survive the never-ending battle between light and dark?

Add To Your Goodreads Shelf

Elle J Rossi grew up in rural Indiana surrounded by great people, a huge family and more animals than she could count. But the sites and sounds of the world beckoned, so she left her small town to escape into a creative world full of music. As a full time singer she was able to lose herself in a thousand different songs in a hundred different places. After meeting the love of her life and settling down, she yearned to find a new and fulfilling creative outlet. Overly fond of the happily ever after, she wondered what it would be like to have her own characters lead her down dark and twisted paths. The very first word on the very first page sealed her fate. She’d found a new love. She’d found her escape. Now along with weaving haunting tales about the journey to love, she’s creating cover art for authors around the world and loving every second of it. For fun, she cranks country music to take her back to her roots, and sings karaoke anytime she gets a chance. Her husband, two children, and a cat that rules the roost keep her company along the way and guarantee she doesn’t get lost in the enchanted forest. She wouldn’t have it any other way.

Excerpt of The Soother:


Her pounding pulse heated Krystoff’s blood and had saliva pooling in his mouth. He swallowed but it wasn’t nearly enough to quench his thirst. Standing behind her, he quickly conjured a pair of jeans and slid them on, then backed away from the inviting skin just below her right ear. This witch’s intense scrutinizing had been quite the test in self-control. One more minute and he would have pinned her against the door and traced his tongue over each and every tattoo decorating her skin.

Krystoff walked around the table and pulled out another chair, flipped it around and sat astride. “Charmer, huh?” He liked the nickname, even though it didn’t suit him. Nothing about his life had been charmed. Blaming Riona would have been easy, but he’d made his own share of mistakes over the years. Something about this witch had him regretting quite a few of those blunders. Perhaps her magick had him ensnared in a spell of remorse.

Her hands found their way to her lap and she sighed. “My sister named you that.”

Red marks in the shape of her fingers marred her pale neck. They would fade, but he didn’t like seeing them at all. He should be the only one marking her neck. What was he thinking? This witch wasn’t his. Nor did he have time for a romp between the sheets— not even a short one. His mother—correction—Riona would be looking for him. It would be wise if he sought her out first. Maybe he’d get lucky and find Riona and Scout in the same place.

His blue-eyed angel stared at him, and he realized she’d been waiting for him to speak. “Sister? Ah, the fire witch.” The witch with red hair had incredible aim. She’d fried many Mistropans with one fireball. How many had she taken out after he’d passed out?

Calliope smiled. “Just one of her many talents. Bevva’s a caster.” The smile vanished.

He watched as she pinched her lips shut and shook her head. “It’s okay. Her secret is safe with me.”

She jerked in her seat as if he’d slapped her. He’d never met such a complex being. One moment she looked ready to throttle him, a second later he thought she’d bolt, and yet another blink and the witch appeared ready to join him for a little skin-on-skin action.

Krystoff cleared his throat and attempted to soften his tone. “It’s the least I can do.

The two of you saved my life. I owe you at least that.” He stuck out his hand. “Name’s Krystoff.”

Wariness danced in her eyes before she sighed again and accepted his hand.

Lovely. “Suits you.” He skimmed his thumb over her knuckle.

She blinked and pulled away, her movements sluggish. “Does it? I never thought so.”

“You’re made to make music and dance under the stars.”

A blush crept across her cheeks. “If only Bevva could hear you now. She’d laugh her way to the moon.” Calliope picked at the chipped black polish on her thumb. “Charmer, indeed. You use those lines on all women, or just the ones who save you from taking a stroll with the banshee?”

Shoving out of her chair, she stomped to the stove and restocked her cabinets with precision. Each methodical movement captivated Krystoff. She waved a glass bottle in front of her face, then placed it on the exact shelf he’d taken it from. He admired her organizational skills.

Krystoff scooted his chair closer. Her pace slowed and a bottle of dill fell from her shaking hands, spilling onto the floor. “Do I make you nervous?”

Her lashes fluttered open. With a deep breath, she turned and leaned against the counter. “No. You make me tired.”

"I can see that.” Dark circles had formed crescents under her eyes and her shoulders sagged beneath her black T-shirt. “Why?” He’d expect her to be tired if he’d gotten his wish and had some fun in that bed of hers. They’d only had a simple and brief conversation. What could possibly be tiring about that?

Calliope shoved her hair out of her face, exposing the stars around her eye. “It really doesn’t concern you.”

Krystoff rose and flashed across the small room. The kitchen blurred beyond recognition, but it mattered not. He knew exactly where he was going. In less than a second, he stood directly in front of her, then tilted her chin up with a gentle touch of one finger. “Are you sure about that?”

More blinking, followed by, “You need to go.”

He smiled, dipped closer. She smelled of powder and lilacs, sunshine and wildflower meadows. A more alluring combination could not possibly exist. “I’m not ready to go.”

Calliope gripped his shoulders and pushed. Krystoff didn’t budge. He held her in place with his body. When she punched him, he laughed. This witch was feisty. If only he had more time.

“What are you?” she asked with one more futile shove.

He considered lying, and then shrugged. “I’m just a soulless half-breed wizard, but I do believe you’re the one who’s cast a spell.” He couldn’t resist. Krystoff dipped his head one more time, touched his lips to hers and became even more enchanted.