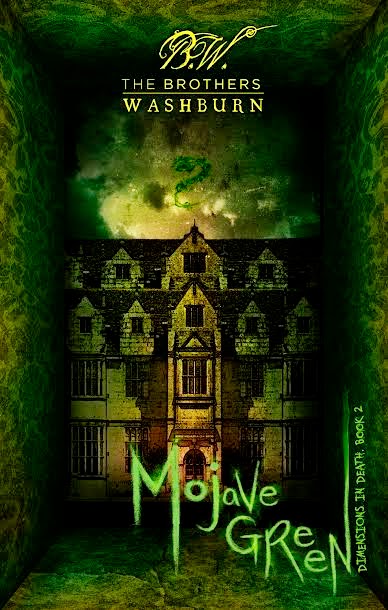 
In Trona, California, an isolated mining town deep in the Mojave Desert, an unearthly creature preyed upon the town’s folk for decades. Armed with secrets from a peculiar puzzle box, only Camm and Cal stood against the creature. Finally safe and far from the horror, the teenagers believe they have destroyed the monster—until they hear news that Trona’s children are still disappearing. Caught in the nightmare since her childhood, Camm feels personally responsible for the town’s children. As her life-long best friend, Cal feels responsible for Camm. With unsuspecting friends in tow, they return to warn the innocent people of Trona of the true nature of the creature.

But things have changed.

Death comes in a new form. The balance between dimensions is altered. Crossovers multiply. Trona is evacuated. Cal is pulled into another dimension. The situation spirals out of control.

A. L. Washburn and B. W. Washburn are brothers, licensed lawyers and full time writers, residing in Colorado and southern Utah. Growing up in a large family in Trona, California, a small mining community not far from Death Valley, they spent many happy days in their youth roaming the wastelands of the Mojave Desert. After living in South America at different times, each came back to finish graduate school and start separate careers. Living thousands of miles apart, they worked in different areas of the law, while raising their own large families.
Each has authored legal materials and professional articles, but after years of wandering in the wastelands of the law, their lifelong love of fiction, especially fantasy, science fiction and horror, brought them back together to write a new young adult horror series, beginning with Pitch Green and later Mojave Green. They have found there yet remain many untold wonders to be discovered in the unbounded realms of the imagination, especially as those realms unfold in the perilous wastelands of the Dimensions in Death.

Pitch Green and Mojave Green are the first two books of the
Dimensions in Death young-adult horror series.  Based on a scary story we
told as kids to our siblings and friends, these books combine horror,
suspense and mystery, moving at a breathtaking pace.  Our protagonists fight
for their lives as they battle a monstrous evil presence, hiding in an old,
abandoned mansion in Trona, California, a small mining town located on the
Searles Valley dry-lake bed in a desolate region of the Mojave Desert, near
Death Valley.
The desert environment of Trona is the perfect stage for this kind
of story.  While the events of the tale are limited only by our
imaginations, the location of each event is firmly anchored in the reality
of what is Trona and the desert around it.  We both grew up in Trona, and
knew it well, but we return there on occasion to make sure our descriptions
of the local geography are correct.  All natural landmarks described in the
books actually exist, and their descriptions add to the bleakness of the
story.  A desolate landscape is a great backdrop for giant, marauding, alien
predators.
In addition, we have researched the far-out theories of
astro-physics, so that Mojave Green can appear to answer the questions
raised in Pitch Green.  But remember, this is not a science fiction series.
The story is fast-paced horror, suspense and mystery based on
pseudo-science, rather than magic and mysticism, so in the end, everything
our heroes do must have some kind of plausible explanation.
Both of us have always enjoyed hearing and telling good scary
stories.  It was a basic part of our growing up experience.  We don't
remember a time when we weren't telling spine-chilling tales.  We vividly
recall lying awake for hours as small children after hearing a horrifying
saga told right at bed time; thinking that every creaking noise, every
whisper of the wind, was the latest monster coming to eat us alive.
Once, as children, we heard some mysterious thing scratching on the
window screen of our bedroom, which was an extra room, shared by three
brothers, built on the back of the house.  All of us dived under the beds,
screaming for help.  Turns out, it was our mom-we should have known-bringing
clothes in from the line.  She had stopped to pick up a stick to reach up
and scrape across our window screen.
Our mom was not above scaring her own children, or anyone else for
that matter.  Once, when still a newlywed, she snuck up the basement stairs
of Grandma Washburn's old house and flung open the kitchen door, shouting
"BOO!" startling her mother-in-law, sister-in-law and two-year-old niece.
Grandma was not fond of such hijinks.  Pointing an accusing finger at our
mother, Grandma exclaimed, "Clara!  For shame! For shame!"  By the time our
father got there to see what was going on, everyone in the room was in
tears.
That did not cure Mom though.  She loved to scare everyone and
anyone.  One Halloween when Andy was in junior high, an older brother and
sister, Allen and Linda, received permission to throw a Halloween party for
their high school friends.  The culmination of the party, its climax, was a
scary story told by Mom.  She said she woke up about 2:00 am, and the story
just came to her as she lie there in bed.
At the party, Mom sat on the fireplace hearth in the front room.
About twenty teens sat on the floor around her feet.  The lights were off.
Only a few rays from an outside streetlight found their way into the room.
Telling the story in a hushed, grim voice, Mom spoke as if she were sounding
a deadly-serious warning.
Soon, some girls started to whimper.  The boys were "obviously" too
brave to complain, but at one point, an older boy suddenly got up and left
the room, not to come back until the story was over.
As Mom talked, Allen crept around the outside of the house to an
unlocked front-room window.  When Mom reached the zenith of horror in the
story, Allen opened the window and climbed into the house.  He was wearing a
full-head mask, colored with glow marks along the dark-red gore painted on
the distorted face.
The screaming and crying was glorious.  Even some guys screamed and
tried to run away.
That was, without a doubt, one of the best Halloweens EVER!
You could say our love for scary stories is nothing more or less
than a chromosomal phenomenon.  However we came by our fascination for
horror stories, we love them still and hope to keep telling them for a long,
long time to come.  If Mom were still here, she would be so proud.

Another smash from The Brothers Washburn!! I couldn't put this installment of Dimension in Death down! Yet again, they pulled me in from the first page! They have this way of pulling you in deeper and deeper until you're so immersed into the story that you don't want to climb out. Read the synopsis up there! It gives me chillbumps just reading it because I remember the horror from Pitch Green. When I found out The Brothers were writing a second installment, I knew I must get it. I wasn't disappointed in the least!

The novel starts off with a bang, then it sort of slows down for a while, and then picks right back up! I adore how the Brothers mix in a bit of humor here and there - it sort of gives you a minute to take a breath - one not caused by gasping from the suspense in the story.

I don't want to give away spoilers so I won't go into too much detail with regards to the new twist that is haunting their old town, but be warned.... I loved it! The Brothers took me by surprise again. In Pitch Green, I never would've guessed what was haunting the old Searles mansion. They did it again with Mojave Green.

I'll tell you one thing... If I lived in their town, I would've left after Pitch Green. Ha. That feeling was reiterated for me in Mojave Green.

The Brothers Washburn's writing style is effortless for me to read. I feel like I'm listening to a story around a campfire and I love that. The rest of the world sort of falls away while I'm reading this series and I'm engrossed in their haunting tales. I adore it!

And this cover! Oh my gosh! Can we pause and review it one more time? I loved Pitch Green's cover and wondered how they would ever match it.... Excellent job, yet again, by Jolly Fish Press!